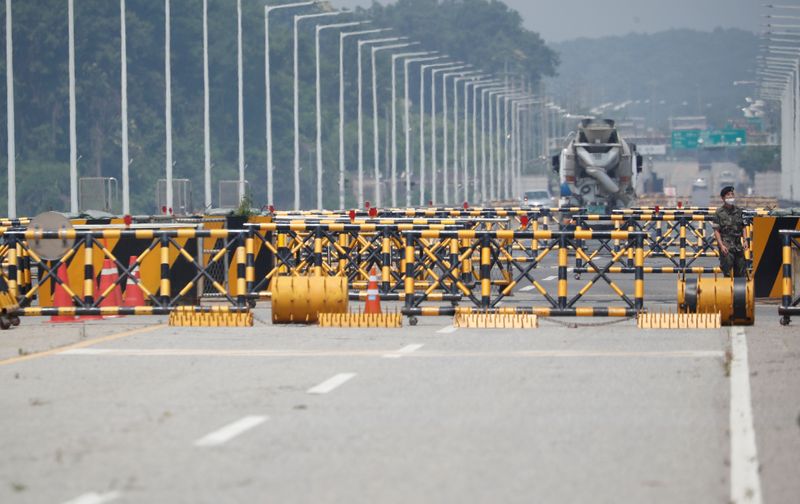 © Reuters. FILE PHOTO: A soldier stands guard at a checkpoint on the Grand Unification Bridge which leads to the inter-Korean Kaesong Industrial Complex in North Korea, just south of the demilitarized zone separating the two Koreas, in Paju

GENEVA (Reuters) – World powers bear responsibility for ignoring crimes against humanity that may still be perpetrated by authorities in North Korea amid a focus on its nuclear programme, a U.N. human rights investigator said on Wednesday.

Tomas Ojea-Quintana urged the U.N. Security Council to refer grave violations in the Democratic People’s Republic of Korea (DPRK) to the International Criminal Court for prosecution.

He voiced concern at reports of severe punishments imposed for breaking COVID-19 lockdown measures, including alleged orders to “shoot on sight” anyone trying to cross the border.

“Crimes against humanity may be ongoing,” Ojea-Quintana told the U.N. Human Rights Council.

He had received information confirming the findings of a landmark 2014 U.N. Commission of Inquiry on extermination, murder, enslavement, torture, rape, forced abortion, sexual violence, political persecution and “the inhumane act of knowingly causing prolonged starvation” in the isolated country.

“The urgency to stop violations of such a scale, gravity and nature cannot take a back seat to national interests or geopolitical interests,” Ojea-Quintana told the Geneva forum.

This was not justifiable under the U.N. Charter, he said, adding: “I believe that the Security Council bears responsibility for its inaction against the continuation of crimes against humanity in the DPR Korea.”

Ojea-Quintana presented his latest report, issued last week, which said that drastic measures taken by North Korea to contain the novel coronavirus have exacerbated abuses and economic hardship for its citizens, including reports of starvation.

“We are concerned about increasing reports of starvation, imprisonment and summary executions,” U.S. charge d’affaires Mark Cassayre told the council.

Australia’s deputy ambassador, Jeffrey Roach, said that North Korea’s top priority should be improving the lives of its citizens. “Instead, the regime’s focus remains on developing weapons of mass destruction and the vehicles for delivering them,” he said.

North Korea’s mission to the U.N. in Geneva did not respond to Reuters’ queries for comment. Pyongyang does not recognise the U.N. investigator’s mandate and boycotted Wednesday’s debate.