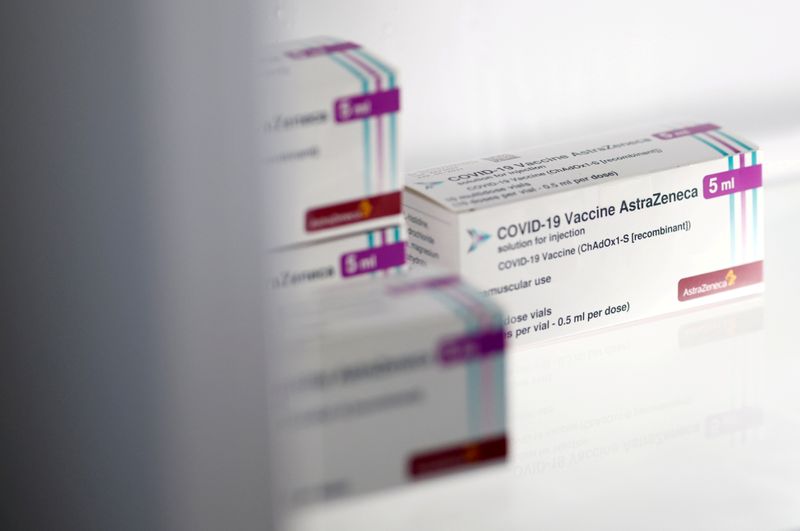 BRUSSELS (Reuters) – AstraZeneca (NASDAQ:AZN) cut its supply forecast of COVID-19 vaccine to the European Union in the first quarter to about 30 million doses, a third of its contractual obligations and a 25% drop from pledges made last month, a document seen by Reuters shows.

The shortfall is a further blow to EU’s vaccination plans already being hampered by repeated delays in supply and a slow rollout in some nations.

The AstraZeneca document, shared with EU officials and dated March 10, shows that the company now expects to deliver 30.1 million doses by the end of March, and another 20 million in April.

On Feb. 25, AstraZeneca boss Pascal Soriot told the European Parliament that the company would try to deliver 40 million doses by the end of March.

The document shows that on Feb. 24, the Anglo-Swedish company had estimated a supply of only 34 million doses to the EU for the January to March period, well below its contracted target of 90 million doses.

The new cut follows a decision last week by Italy and the European Commission to block a shipment of AstraZeneca vaccines from Italy to Australia, in the first application of an EU mechanism that allows the bloc to refuse export requests from vaccine makers that do not comply with EU supply contracts.

A spokesman for AstraZeneca declined to comment on Friday.

A person familiar with the situation said that the increased deliveries the company had expected for the first quarter did not materialise because of difficulties in moving vaccines through global supply chains.

The United States, from where AstraZeneca expected to partly supply the EU market, told the EU that it would not export AstraZeneca shots in the near future, Reuters reported on Thursday, citing EU officials.

The company had said its initial supply cuts were caused by production problems in the EU.

“I see efforts, but not “best efforts”. That’s not good enough yet for AstraZeneca to meet its Q1 obligations,” EU industry commissioner Thierry Breton said on Twitter late on Thursday.

“It’s time for AstraZeneca’s Board to exercise its fiduciary responsibility and now do what it takes to fulfil AZ’s commitments,” Breton added.

AstraZeneca has committed to making its “best reasonable efforts” to meet the targets set in its contract with the EU, which foresees delivery of 300 million doses from December to the end of June. The vaccine was approved for use in the EU in late January.

The AstraZeneca document also shows that the company expects to deliver about 20 million doses to the EU in April, more than half of that in the last week. It includes no forecasts for May or June.

AstraZeneca has committed to supplying the 27-nation bloc with 180 million doses between April and June.

But EU countries since February have updated their vaccination plans to include only half of the contracted doses after AstraZeneca told them it was facing difficulties.

Germany, the largest country in the bloc, is expected to receive 19% of the AstraZeneca supplies to the EU between next week and the end of April, or a total of about 6 million doses, including over 2 million in the last week of the month, the document shows.

France should receive nearly 15% of the total, or about 4.7 million shots. Italy, with almost 14% of the overall expected supplies, is to get 4.4 million by the end of April, the document shows.AstraZeneca further cuts EU vaccine supply target to 30 million: document2Com