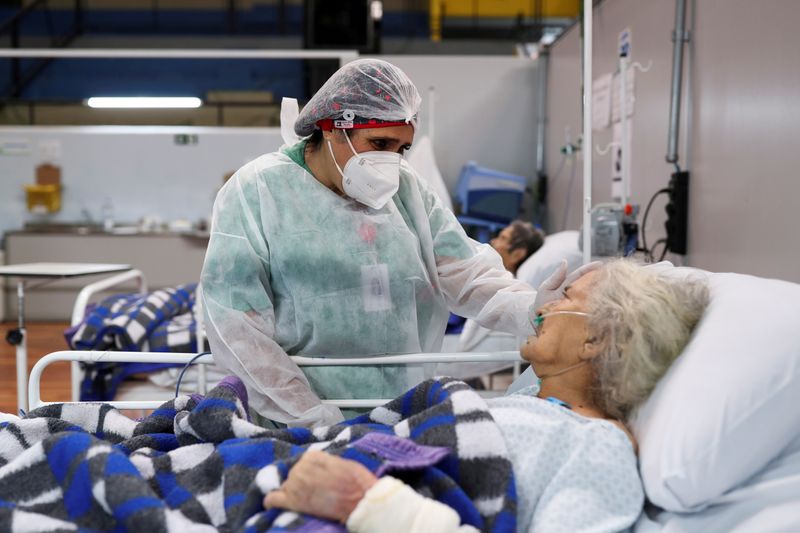 SAO PAULO (Reuters) – Hospitals in Brazil’s main cities are reaching capacity, health officials warned, as the country recorded the world’s highest COVID-19 death toll over the past week, triggering tighter restrictions on Thursday in its most populous state.

Intensive care wards for treating COVID-19 patients have reached critical occupancy levels over 90% in 15 of 27 state capitals, according to biomedical center Fiocruz.

As President Jair Bolsonaro rails against lockdowns and urges Brazilians out of their homes, governors and mayors have struggled to enforce restrictions, often pleading in vain with a population inured to the rising tide of the epidemic.

The far-right president attacked governors for the lockdowns again on Thursday, including Sao Paulo state’s move to ban soccer matches. He said they were increasing poverty with a medicine that was worse than the virus.

“How long can we stand this lockdown irresponsibility? You close everything and you destroy millions of jobs. Lockdown is not a cure,” Bolsonaro said in a remote talk to a business group with Economy Minister Paulo Guedes at his side.

Brazil’s two most populous cities, Sao Paulo and Rio de Janeiro, on Thursday moved to tighten measures as their hospitals struggled with a second wave of the virus, driven by a more contagious variant that emerged in the Amazon (NASDAQ:AMZN) region.

While Europe and the United States ramp up vaccinations and bring down their caseloads, Brazil’s federal government is off to a slow start, with only 2% of the 210 million Brazilians fully inoculated so far.

In the nation’s capital Brasilia, which is under a nighttime curfew, public hospital ICU wards are 97% full and private ones are at 99%, forcing the city to again set up field hospitals as it had during a peak in cases last year.

On Thursday, Sao Paulo Governor João Doria announced a “new stage” of restrictions to enforce social distancing, arguing it is now the only weapon against the spread of the virus.

They include a curfew from 8:00 p.m. to 5:00 a.m., the suspension of religious services and sports events, including soccer matches, and people not being allowed to use beaches and parks.

“This is a tough, unpopular decision. No governor wants to stop the economic activities in their state,” Doria said at a news conference.

The state of Sao Paulo, home to some 44 million people, is currently allowing only essential stores such as supermarkets and pharmacies to receive shoppers.

The Sao Paulo health secretary said hospitals in more than half of the state’s municipalities are full and half the patients are under 50 years old.

Last year, the most serious cases were concentrated among elderly Brazilians.Brazil hospitals pushed to limit as COVID-19 death toll soars Add a Comment