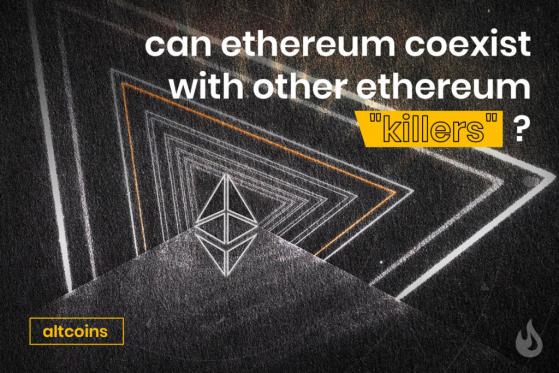 Can Ethereum Exist With All The Killers?

The Ethereum community has experienced tremendous growth since its inception on July 30th, 2015 by Vitalik Buterin, Gavin Wood, and six other co-founders. The reason for its success is a foundation built to address the deficiencies of Bitcoin, allowing for the execution of decentralized smart contracts.

Ethereum’s ability for developers to write and run software that is resistant to censorship, downtime, and fraud is another reason why Ethereum continues to thrive. Despite these revolutionary ideas, Ethereum has been plagued with problems such as expensive gas fees and scalability issues.

New off-shoots have sprung forth in an attempt to “kill off” Ethereum by fixing the shortcomings of the cryptocurrency. Despite their bravery, Ethereum still managed to reach its all-time high of $2,036.29 last month coexisting with its touted killers.

Ethereum has built a solid infrastructure over the years and while it is a great platform, it has some shortcomings. EOS tried to remedy the problem of Ethereum but it failed to live up to its expectation. It had its own regular hiccups and failures and its Delegated Proof of Stake could not fit the billings of a challenger through to Ethereum.

EOS actively branded itself as the “Ethereum killer” and garnered a lot of attention but failed to deliver on its promises. presently, EOS trades at $4.08 and is ranked as the 26th cryptocurrency by market capitalization.

Another proposed Ethereum killer is Polkadot. Founded by Gavin Wood, part of the team that launched Ethereum, Polkadot looks to challenge Ethereum directly. Polkadot utilizes the parachain technology which are essentially blockchains that run higher transactions than Ethereum because of their sophisticated design.

Polkadot’s analysts also say moonbeam will be used to mimic a toolkit that would look familiar to Ethereum developers. “We are still very important”, says KRI’s Schreven. “But we see Polkadot’s approach has been a kind of a natural progression of the whole ecosystem.”

Another strong competitor for the position is Cardano. Like Polkadot, Cardano is a Proof-of-Stake (PoS) blockchain that seeks to introduce the mass adoption of PoS before the Ethereum blockchain can completely shift from a Proof-of-Work (PoW) protocol to a PoS protocol.

Cardano, unlike most ETH killers, has its focus fixed on trying to solve real-world problems in Japan and most of the developing world. These ETH killers boast better transaction speeds, scalability, and have great potential in integrating blockchains through their efficient and low transaction cost PoS algorithms.

While the technology behind alternatives to Ethereum is terrific, it will take a heinous effort for new platforms to “kill off” Ethereum because it has the first-mover advantage and it offers a lot of practicality to developers.

The strong community around Ethereum comes in handy when developers encounter a challenge. While Ethereum may be technically inferior to these new cryptocurrencies, it has survived for about four years despite chunks in its armour.

Ethereum killers, at the moment, have not built the sort of reputation to finish Ethereum off. With Ethereum 2.0 on the way promising to fix some deficiencies on the network and a thriving system built on the ERC-20 ecosystem. For the near future, Ethereum and its killers will coexist without impediments.

Continue reading on DailyCoinCan Ethereum Exist With All The Killers?