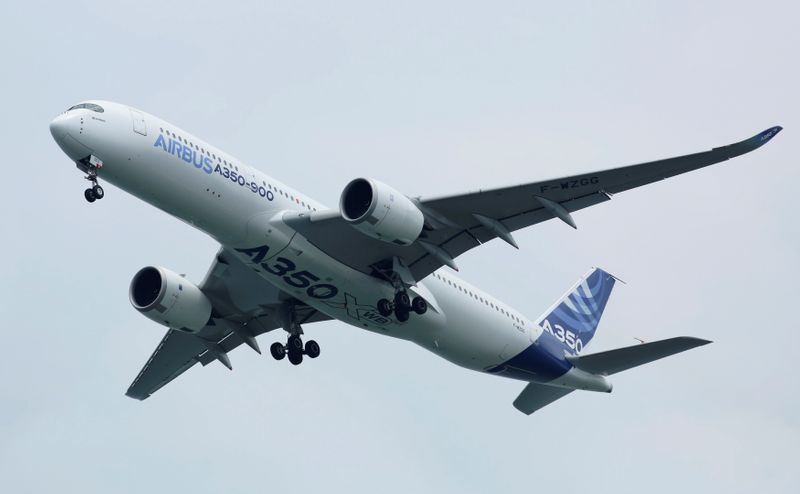 © Reuters. FILE PHOTO: An Airbus A350-900 aircraft performs a flight pass during the Singapore Airshow in Singapore

PARIS (Reuters) – Airbus is canvassing airline support for a potential freighter version of its A350 passenger jet, targeting a key stronghold of U.S. rival Boeing (NYSE:BA) as e-commerce lifts demand for transported goods, people familiar with the matter told Reuters.

The jet would be the first freighter spin-off of the latest generation of carbon-fibre jets and help stabilise output of wide-body jets that have been badly hit by the COVID-19 crisis.

But a launch depends on identifying enough buyers willing to take a punt on fickle cargo demand in the midst of the aviation industry’s worst downturn, which has trampled airline finances.

“We are always looking at product developments but do not comment on specific programmes,” an Airbus spokesman said.

Air freight demand, which was weak before the COVID-19 crisis, has soared as home-bound shoppers turn to e-commerce, but analysts warn it is volatile and prone to extended downturns.

Normally about half the world’s air cargo is carried in the bellies of passenger jets, but a hit to travel from the pandemic has left the world more reliant on dedicated freighters and conversions of passenger planes.

Although it has vaulted past Boeing as the world’s largest producer of passenger jets, Airbus has had limited success in penetrating the freighter fortress of its arch-rival.

It pulled the plug on a freighter version of its A380 superjumbo almost 15 years ago and has had no freighters in its order pipeline since December, when Turkey’s MNG Airlines cancelled three A330 freighter.

Boeing has delivered 202 of the rival 777 freighter, compared with 38 of the A330 cargo version. Dominating the trade lanes is Boeing’s 747 freighter with more than 260 delivered.

It is not the first time a possible new freighter has been mooted. The latest design on the drawing board at Airbus’s Toulouse headquarters in France involves a slightly longer aircraft than the best-selling Airbus A350-900 jetliner.

Its development poses technical challenges since it would involve placing a cargo door in the composite shell chosen by Airbus to compete with Boeing’s lightweight composite 787.

Experts say cutting composite is more challenging than traditional aluminium, though Airbus could reap benefits from a decision – seen as costly at the time – to build the A350 from composite panels rather than barrel sections used on the 787.

Industry sources estimate Airbus would need commitments for some 50 aircraft to go ahead with a launch, with Chief Executive Guillaume Faury focusing on carrying out a major restructuring while directing resources towards an A321XLR passenger plane.

A development would cost an estimated $2-3 billion.

Temptingly, the booming freight market offers respite from a slump in demand for big jets that has forced Airbus and Boeing to slash production, with A350 output halving to five a month.

More than a third of wide-body jets sold by Boeing in the past year have been freighters.

But the same crisis that crippled passenger travel has also created a glut of unused passenger planes that can be converted more cheaply into freighters than buying new. That means the business case for developing a new aircraft must be watertight.

“Given the A350 production rate has been cut … and the cargo market is the one bright spot in the wide-body market, one would have to say the likelihood of an A350F has increased compared to a year ago,” said Richard Evans, senior consultant at UK-based Ascend by Cirium.

While not imminent, a launch could jog Boeing into reacting with a freighter version of its larger 777X, he added, though Boeing must also grapple with delays in its certification.Exclusive: Airbus targets Boeing’s freight fortress with potential A350 cargo jet – sources Add a Comment