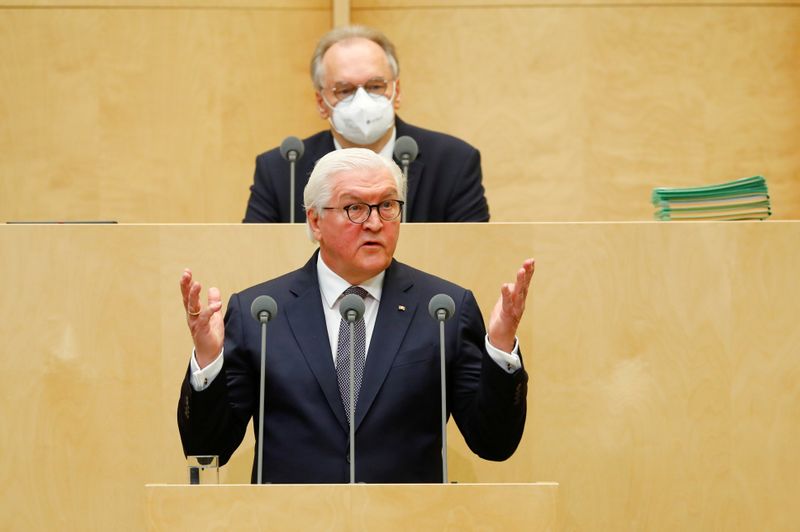 A lawmaker from Chancellor Angela Merkel’s conservative bloc on Thursday became the third within a week to resign from her parliamentary group over the scandal, which risks costing the Christian Democrats in Sunday’s twin state votes.

Anger about the scandal is compounding frustration among Germans with Merkel’s conservative-led coalition over a sluggish coronavirus vaccine rollout caused by supply shortages and leaden bureaucracy.

Steinmeier, a member of the left-leaning Social Democrats (SPD), acknowledged in a rare intervention into domestic politics that Germans were tired of living under lockdown.

“…And then have to hear that MPs, of all people, are holding out their hand before the modest medical protection of face masks even reaches the people…That is shabby and shameful!” he told a conference hosted by the Frankfurter Allgemeine Zeitung newspaper.

In the past week, the CDU’s Nikolas Loebel has given up his seat and Bavarian conservative Georg Nuesslein stepped down from the parliamentary party. Both had been accused of receiving payments for brokering face mask procurement deals.

Mark Hauptmann from the eastern state of Thuringia told the CDU he would give up his seat in parliament, his office confirmed on Thursday, after allegations that he helped contacts in Azerbaijan with procurement.

The scandal is embarrassing for the CDU, which has seen its support slip in the states of Baden-Wuerttemberg and Rhineland-Palatinate where elections on Sunday will be a crucial gauge of popular feeling before a September federal election.

A March 10 poll, from Forsa, put the conservative bloc on 33%, down from 40% in June when Merkel won plaudits for her management of the coronavirus crisis in its first phase. She will not seek a fifth term as chancellor in September.

Another survey on Friday showed support for the CDU’s Bavarian sister party, the CSU, slumping 4 points within a month to 41.6%.German president blasts ‘shameful’ MPs over face mask scandal Add a Comment