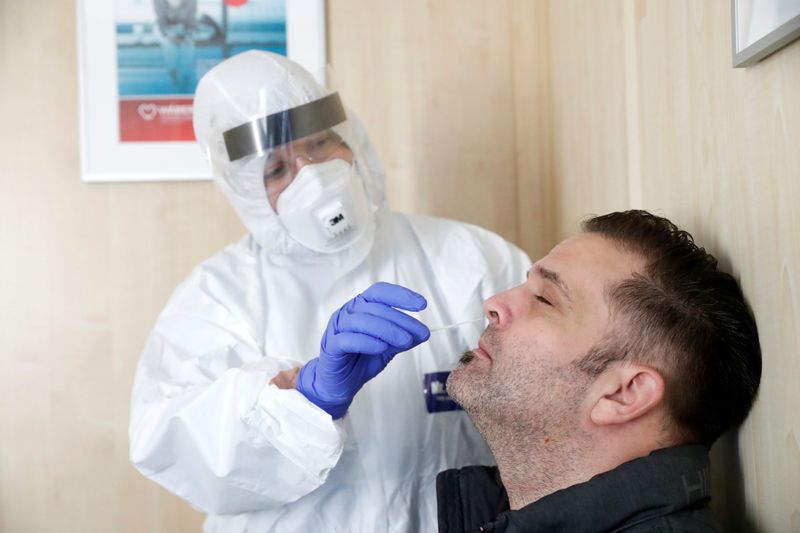 © Reuters. Spread of the coronavirus disease (COVID-19), in Budapest

BUDAPEST (Reuters) – Hungary said on Thursday it was paying the equivalent of about $37.50 per dose for Chinese company Sinopharm’s COVID-19 vaccine and $9.95 per dose for the Russian Sputnik-V vaccine, adding it was publishing the purchase contracts to push for more transparency.

“We ask the European Commission that it also publish the contracts signed by Brussels,” Gulyas added.

Hungary was the first EU nation to buy and use Chinese or Russian jabs and initially came under fire for its separate approval process and negotiations for the vaccines. More recently, several European countries have also expressed interest in buying those vaccines as shipments from Western suppliers lagged.

Hungary used multiple suppliers to secure the most vaccines per capita in the EU, and also inoculated the highest number of people per capita in Europe, according to data from the European Centre for Disease Prevention and Control (ECDC).

It has only used 65% of its available vaccines as supply has risen in recent weeks.

Orban wants to immunise as many people as he can quickly to be able to reopen the country after a new lockdown imposed this week, closing all schools and most shops in an effort to contain a record rise of coronavirus cases.

A delivery of 450,000 doses of Sinopharm vaccines on Thursday took shipments from China to 1 million doses.

In the contracts, Hungary’s National Public Health Centre commits to paying 150 million euros plus tax for 5 million doses of the Sinopharm vaccine, well over the price of Pfizer/BioNTech or AstraZeneca (NASDAQ:AZN) vaccines approved by the European Medicines Agency.

It agreed to pay $20 million for 2 million doses of Sputnik V.

Hungary had given a first dose of a vaccine to 1.149 million people as of Thursday.

Israeli authorities, who have vaccinated around 55% of the country’s 9 million people with at least one dose of the Pfizer/BioNTech vaccine, have not said publicly what they paid for it but one official said on condition of anonymity it was paying “around twice the price abroad.”