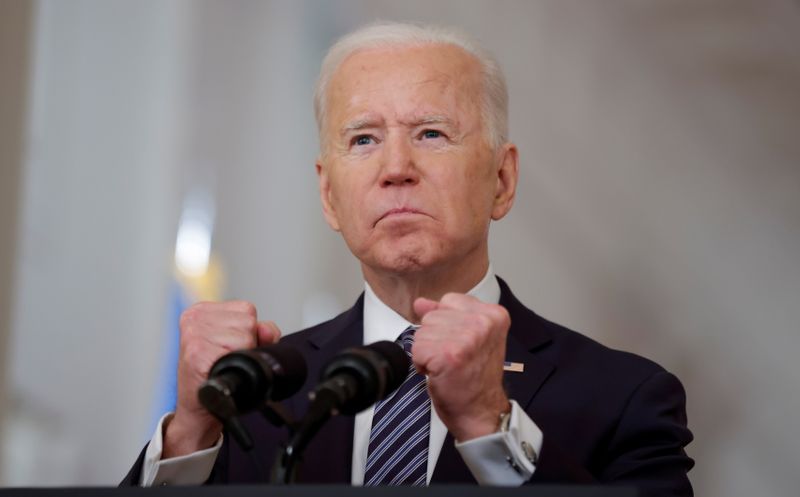 © Reuters. U.S. President Biden delivers an address to the nation about the coronavirus disease (COVID-19) pandemic from the White House in Washington

By David Brunnstrom and Michael Martina

WASHINGTON (Reuters) – U.S. President Joe Biden will meet on Friday with the leaders of Australia, India and Japan, a group central to his efforts to counter China’s growing military and economic power.

The White House said the virtual meeting of the countries known as the Quad would show the importance Biden placed on the Indo-Pacific region and focus on ways to fight the coronavirus, cooperate on economic growth and the climate crisis.

India and Australia have emphasized the importance of regional security cooperation, which has been boosted by previous lower-level meetings of the four countries.

A senior Biden administration official told Reuters the meeting would announce financing agreements to support an increase in manufacturing capacity for coronavirus vaccines in India, something New Delhi has urged to counter China’s widening vaccine diplomacy.

The United States wants to strengthen ties with allies and partners as China adopts an increasingly assertive foreign policy in Asia and beyond. Washington says the additional vaccine capacity will be used in vaccination efforts in Southeast Asia, where Beijing is competing for influence.

Among the issues to be addressed are supply chains exposed as heavily reliant on China during the pandemic.

Japan’s Nikkei newspaper reported on Thursday that the four countries would work together to secure rare earth metals essential to the production of electric car motors and other products.

However, Indian government sources said U.S. curbs on exports of critical materials could hamper that effort and those to start large-scale distribution to Southeast Asia.

India, Australia and Japan have all faced security challenges from China, strengthening their interest in the four-nation alliance. Cooperation among them dates back to their joint response to the Indian Ocean earthquake and Tsunami in 2004.

The Quad was revived under the Trump administration, which saw it as a vehicle to push back against China’s spreading influence. The United States hosted a foreign ministers’ meeting in 2019, that was followed by another in Japan last year and a virtual session in February.

Friday’s meeting coincides with a major U.S. diplomatic drive to solidify alliances in Asia and Europe to counter China.

On Sunday, Secretary of State Antony Blinken and Defense Secretary Lloyd Austin will head to Japan and South Korea for the first meetings between senior officials of the Biden administration and U.S. allies – underscoring the critical importance Washington places on Asia and the China challenge.

Washington has said it will not hold back in its criticism of Beijing over issues ranging from Taiwan to Hong Kong and the genocide it says China is committing against minority Muslims.

Biden’s administration has committed to reviewing elements of policies toward China, in consultation with allies, as the world’s two largest economies navigate frosty relations that sank to their lowest depths in decades during Donald Trump’s presidency.

Biden and Chinese President Xi Jinping held their first phone call as leaders last month and appeared at odds on most issues, even as Xi warned that confrontation would be a “disaster” for both nations.In China strategy, Biden to meet with leaders of Australia, India, Japan