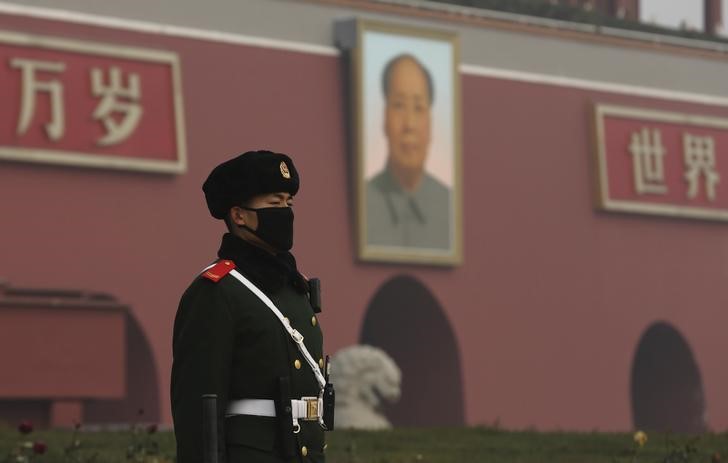 © Reuters. NPC: What We Learned From China’s Biggest Political Meeting

(Bloomberg) — China’s highest-profile political meeting of the year concluded Thursday, with the government laying out economic plans to manage risks now that a recovery from the coronavirus pandemic is well underway.

Here’s what we learned from the week-long gathering of the National People’s Congress in Beijing.

After posting the only expansion of any major economy last year, the government signaled China won’t be the world’s only growth engine in 2021. Instead it wants to focus on making the domestic expansion more sustainable by reducing debt levels and encouraging companies to be more innovative.

A target of “above 6%” growth in gross domestic product this year is well-below the 8.4% increase predicted by economists. Premier Li Keqiang told reporters Thursday the target isn’t low, and reflects uncertainty about the economic rebound in China and the world, as well as the need for more stable expansion domestically. President Xi Jinping told political delegates “a higher target could be set, but we are leaving some room so that we are able to focus more on high-quality growth,” according to Xinhua News Agency.

Due to last year’s low base caused by the pandemic, the target can be reached even if there’s no quarter-on-quarter expansion for the rest of the year. The growth rate could be surpassed by other large economies such as India, which contracted last year, while a large U.S. fiscal stimulus means the growth gap between the world’s two largest economies will narrow.

The low target is somewhat of a concession to officials who have long-argued for abolishing the target as it encourages local governments to engage in wasteful debt-funded investment projects. An easy-to-reach target sets a baseline for the economy while giving local officials an opportunity to focus more on long-term reforms such as cutting corporate debt levels, improving public services and investing in hi-tech sectors.

Beijing is targeting a smaller budget deficit this year — down to 3.2% of GDP from 3.6% last year — but that doesn’t mean it’s cutting back on spending.

The “effective deficit,” or gap between government spending on services and revenue raised from taxes and fees, will fall by just 0.9 percentage points from last year, according to estimates from Goldman Sachs Group Inc (NYSE:GS). The quota given to local governments to issue bonds for investment projects was reduced by a less-than-expected 100 billion yuan, and unspent funds left over from bond issuance last year could be deployed to make up for the difference.

Partly because last year’s government outlays were lower than expected, Beijing should be able to “avoid any fiscal consolidation at all,” said Adam Wolfe, an economist at Absolute Strategy Research in London. That suggests officials believe more support for the economy is needed due to a slow recovery in household spending. Strong spending on investment projects by local governments should help support markets for global commodities such as copper and iron ore.

Authorities kept their monetary policy message unchanged: support economic growth and control financial risks, such as asset bubbles. That means keeping levels of liquidity in the financial system broadly stable, and credit expansion roughly in line with the pace of nominal growth.

If GDP stays close to the target this year, then the pace of new loan growth would slow compared with 2020.

Gross government bond issuance could rise by 5% this year to an all-time high of 14 trillion yuan, according to Standard Chartered (OTC:SCBFF) Plc. The benchmark 10-year bond yield has already risen almost 80 basis points since the lows of last April and could reach 3.5% by the end of the second quarter, said Becky Liu, Standard Chartered’s head of China macro strategy. That could support the yuan as higher yields make the asset class more attractive to foreigners.

Chinese stocks had their worst performance during the NPC since 2009, with concerns over liquidity tightening and possible asset bubbles casting a cloud on this year’s gathering. Intervention by state-backed funds — known as the “national team” — did little to stem the selloff earlier in the week.

China plans to rival the U.S. in tech

Beijing wants to reduce Chinese companies’ dependence on the U.S. for key technologies such as microchips and move its manufacturers into cutting-edge sectors. It published some details of how it hopes to achieve that — though with less detail than previous plans, like the “Made in China 2025” one, which produced a backlash from the U.S. and Europe.

Public and private sector spending on research and development of new products is projected to rise to $580 billion a year by 2025 — more than the U.S. spent in 2018, the most recent year for which data are available. In the five-year plan released at the opening of the NPC, the government said it wants researchers to focus on semiconductors, artificial intelligence, quantum computing, neuroscience, and biotech.

As it moves toward a target of peaking carbon emissions by 2030, Beijing aims to increase the non-fossil fuel share of energy consumption to 20% by 2025. Part of that will be achieved through nuclear power, meaning the equivalent of 20 new nuclear reactors need to be built by then.

The NPC’s overwhelming vote in favor of overhauling Hong Kong’s elections was the latest move to rein in democratic institutions in the former British colony. The rubber-stamp parliament approved a proposal to change the size and composition of the body that picks the city’s chief executive. It also called for establishing a vetting committee to ensure candidates for office are “patriots.”

Chief Executive Carrie Lam said Monday that the revamp would require the local legislature to enact further legislation, which would be pushed through without public consultation. What is meant by “patriots” or who would decide who gets that label remained unclear. A senior Chinese diplomat in Hong Kong said this week that patriots were expected to “respect the Chinese Communist Party.”

(Updates with comments from President Xi)