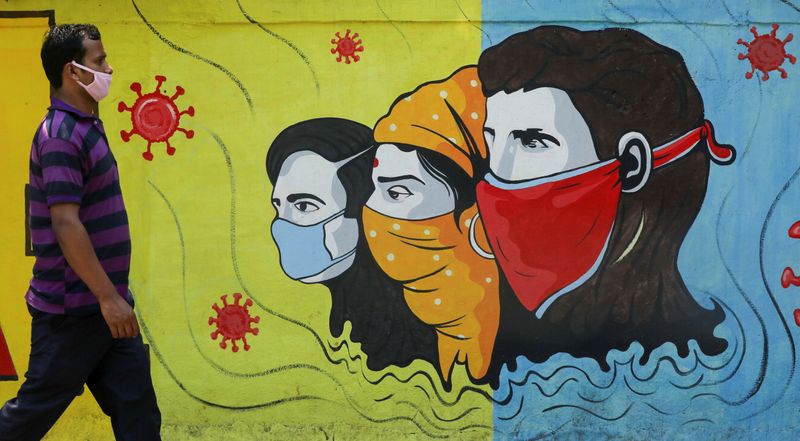 © Reuters. FILE PHOTO: Man wearing a protective mask walks past a graffiti amidst the spread of COVID-19, in Navi Mumbai

NEW DELHI (Reuters) – About 3,000 police will be deployed to enforce a week-long curfew and lockdown in the central Indian city of Nagpur from Monday after a 60% jump in coronavirus cases there, officials said.

The commercial and logistics hub in Maharashtra state will be the first Indian city to go back into a wholesale lockdown since authorities lifted nationwide curbs in June last year.

Officers will be watching traffic to stop unnecessary journeys and checking that most offices and shops, apart from groceries and pharmacies, stay closed, Nagpur police commissioner Amitesh Kumar said.

“It’s a curfew except for the essential services. Hospital and medical shops will be functioning and people going for vaccination will be facilitated,” he told Reuters.

The medical superintendent at Nagpur’s Government Medical College & Hospital said infections in the city had risen 60% over the last two weeks to around 13,000, among the highest in Maharashtra.

“There is an increase in social gatherings, and people not following norms related to sanitisation, masks and physical distancing,” Avinash V. Gawande added.

India’s overall case load has climbed to 11.3 million, second only to the United States.

A total of 23,285 new coronavirus cases were reported across the country in the last 24 hours, the health ministry said on Friday – the highest daily rise since Dec. 24, according to a Reuters tally.

Deaths rose by 117 to reach 158,306. Fatalities have been rising by a daily average of roughly 100 since early February.

The government has been driving a nationwide immunisation campaign aiming to vaccinate a fifth of the country’s 1.3 billion people by August.

Maharashtra, which also includes the financial capital Mumbai, has around 2.27 million cases – the highest of any state in India.

Medics say there has also been a steady rise in cases in the capital New Delhi over the past two weeks, likely due to increased travel and slackened hygiene measures.Police to enforce lockdown in central Indian city as infections surge Add a Comment