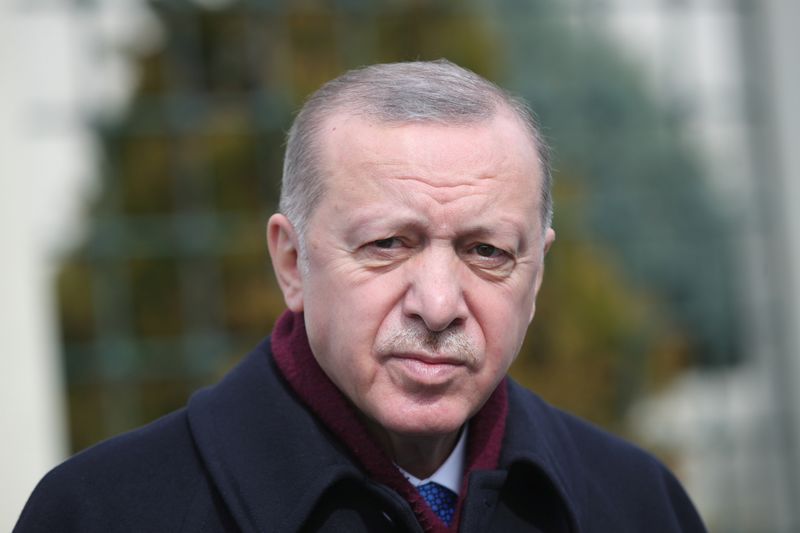 © Reuters. Turkish President Erdogan talks to media after the Friday prayers in Istanbul

ANKARA (Reuters) – Turkey has resumed diplomatic contacts with Egypt and wants to further cooperation, Turkish leaders said on Friday, after years of tension since the Egyptian army toppled a Muslim Brotherhood president close to Ankara.

Any thaw in ties between the two regional powerhouses could have repercussions around the Middle East, where Cairo and Ankara have sought to influence events in various hotspots and stand on opposing sides in a Mediterranean maritime dispute.

Two Egyptian intelligence sources said Turkey had proposed a meeting to discuss cooperation, but suggested the contacts were still only preliminary.

Foreign Minister Mevlut Cavusoglu was quoted as saying by state-owned Anadolu news agency: “We have contacts with Egypt both on the intelligence level and the foreign ministry level … Contacts at the diplomatic level have started.”

Relations with Cairo have been frosty since Egypt’s army ousted Mohammed Mursi, Egypt’s first democratically elected president and an ally of Erdogan, after protests in 2013.

An Egyptian security official received a phone call from a Turkish intelligence official on Thursday, setting out Turkey’s desire for a meeting in Cairo to discuss economic, political and diplomatic cooperation, the Egyptian intelligence sources said.

The Egyptian official welcomed the call and promised to respond as soon as possible, the Egyptian sources said.

The call followed unofficial contacts between Egyptian and Turkish security officials in which communications between the two sides were discussed. The issue of maritime borders, a source of tension between Turkey and other east Mediterranean countries, was not raised, according to the sources.

Rebuilding trust will be hard. As well as the tensions over the ousting of Mursi and Mediterranean disputes, Egypt’s Foreign Minister Sameh Shoukry said last week the Arab League expressed its “categorical rejection” of Turkish military interventions in Syria, Iraq and Libya.

Ties with Riyadh have been strained over the killing of journalist Jamal Khashoggi in the Saudi consulate in Istanbul in 2018 and a row between Turkey’s ally Qatar and other Gulf Arab states. Trade has collapsed under an informal boycott by Saudi businesses.

Turkey has also been at odds with the United Arab Emirates over the conflict in Libya, and both countries have accused each other of disrupting regional stability.

“We never blamed the Saudi Arabian leadership,” Cavusoglu said. At the time, Erdogan said the operation was ordered at the “highest levels” of the Saudi government. Erdogan spoke to King Salman in November and they agreed to resolve differences through dialogue, Turkey’s presidency said.Turkey says it has restarted diplomatic contacts with Egypt Add a Comment