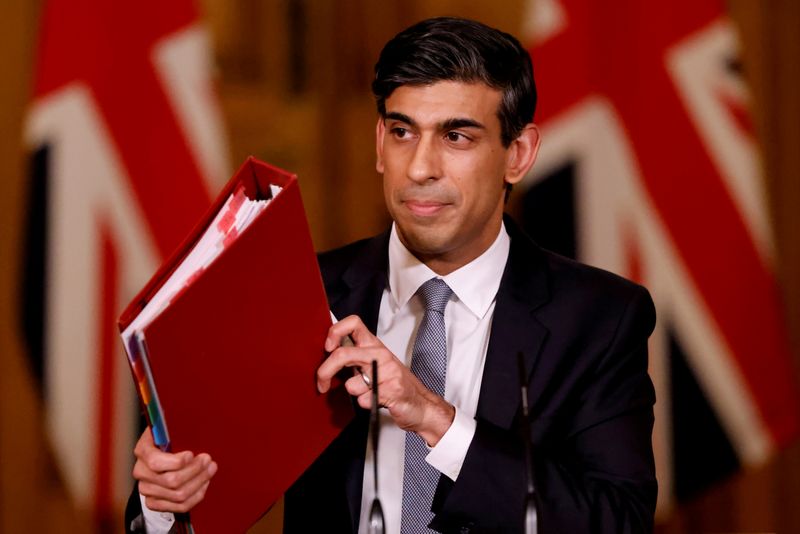 By William Schomberg and Andy Bruce

LONDON (Reuters) – British finance minister Rishi Sunak said on Thursday he did not favour setting a specific target for the level of public debt as a share of economic output, as broader criteria were better suited for future fiscal rules.

Last week Sunak announced a new budget plan which included a further 65 billion pounds ($91 billion) in stimulus to help the economy through what he hopes will be a gradual lifting of coronavirus restrictions between now and the end of June.

Britain’s public debt has leapt to more than 2 trillion pounds as a result of the huge increase in spending and tax cuts ordered by Sunak in response to COVID-19, and it is expected to be above 100% of gross domestic product until at least the mid-2020s.

Sunak’s budget plan included no new budget rules which previous governments have set to show investors how they plan to bring down debt.

He said the uncertainty about the impact of the pandemic on the economy remained too high to be able to set new rules for now.

Before winning elections in 2019, Prime Minister Boris Johnson’s Conservative Party said it would adopt a rolling target of bringing day-to-day spending into balance with tax revenues within three years.

Sunak’s budget plan is seen achieving that by the middle of the decade but the margin for error is small, meaning it would not take much in terms of slower-than-expected tax revenues or higher spending for the target to be missed.

The 2019 promises also included a reassessment of the government’s budget plans if debt interest payments exceeded 6% of revenues, more than double the current share of spending which goes on debt interest thanks to a slump in borrowing costs.

However the rules proposed by the Conservatives in 2019 have not yet been turned into formal targets because of the upheaval wrought by the coronavirus crisis.