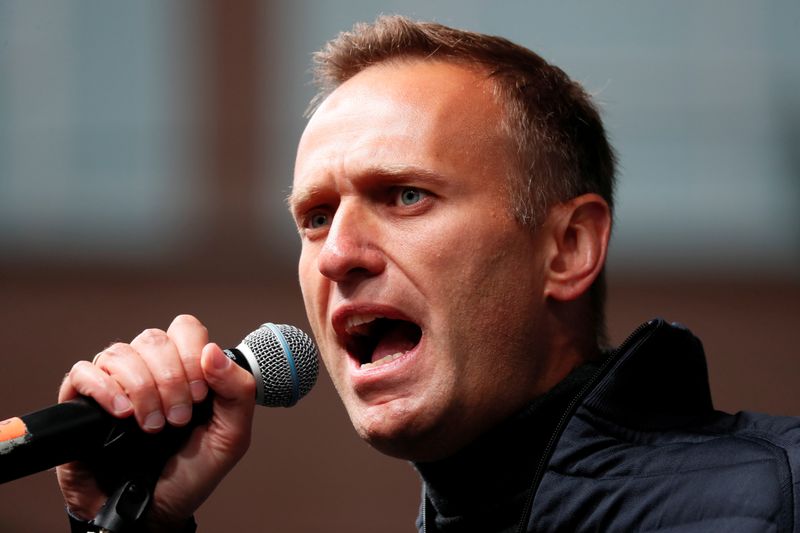 GENEVA (Reuters) – Dozens of countries including the United States called on Russia on Friday to release Kremlin critic Alexei Navalny saying his imprisonment was unlawful and demanding an investigation into his poisoning last year.

In a statement read out by Poland to the U.N. Human Rights Council in Geneva, they said that actions by Russian authorities against the opposition leader were “unacceptable and politically motivated”. The 45 countries were mainly European but also included Australia, Canada and Japan.

Navalny, a prominent critic of President Vladimir Putin, was jailed for two and a half years last month over alleged parole violations related to an embezzlement case he said was trumped up for political reasons, something the authorities deny.

“We call on the Russian Federation for the immediate and unconditional release of Mr Navalny and of all those unlawfully or arbitrarily detained, including for exercising their rights to freedom of peaceful assembly and association, freedom of opinion and expression, and freedom of religion or belief,” the joint statement said.

“We are also concerned by the large number of arbitrary arrests of protesters who were expressing their support for Mr Navalny in many Russian cities,” the statement added.

Russia has previously described such criticism as interference in its internal affairs.

Britain’s ambassador, Julian Braithwaite, said it was “disgraceful” that Navalny, who was poisoned last year with what Western countries say was a military-grade nerve agent, had been jailed while the poisoning was not investigated.

On Friday, Navalny’s lawyers said he had been moved from a jail in Russia’s Vladimir region and his whereabouts were unknown.

U.N. human rights experts said on March 1 that Russia was to blame for the attempt to kill Navalny, and called for an international investigation into his poisoning. Moscow denies poisoning Navalny and says it has seen no evidence.

“Today’s statement should be just the start of greater Council scrutiny and action to end the crackdown,” John Fisher of New York-based Human Rights Watch said.

The United States and European Union have imposed sanctions on Russian individuals and entities over the Navalny case. The Kremlin called the moves absurd, unjustified and void of any real impact.Western countries call on Russia at UN rights body to release Navalny