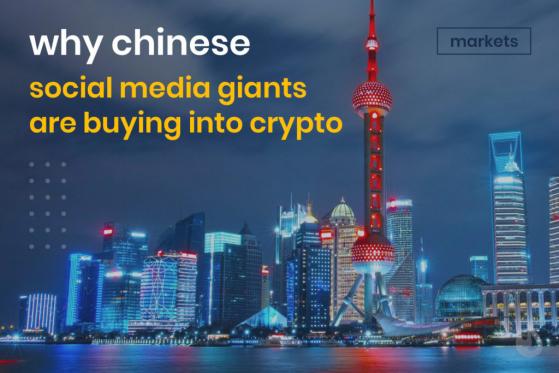 Why Chinese Social Media Giants Are Buying Into Crypto

Monday’s sudden surge in Bitcoin’s price seemed very similar to another occurrence from this same year. On Monday, Bitcoin and Ethereum increased in price after the Chinese photo-editing app Meitu added $40 million worth of cryptocurrency to their treasury. They purchased over $22.1 million worth of Ethereum and $17.9 million worth of Bitcoin, becoming another major software juggernaut that has invested in cryptocurrencies. The price of Bitcoin and Ethereum began to rally on Monday, with Bitcoin topping $1 trillion in value again on Tuesday and nearing its all-time high of over $58,000.

Two other leading companies, Tesla (NASDAQ:TSLA) and Square, have also disclosed their Bitcoin investments, helping the coin consolidate its place as a stable investment. However, Meitu is the first major company to stake its investment into the second-largest cryptocurrency, Ethereum. It’s their first stake into the crypto space, as they aim to add a total of $100 million into their treasury as a stable investment which is financed by their cash reserves, as disclosed on Sunday by the company.

Meitu is a Chinese beauty app listed on the Hong Kong Stock Exchange that gained market dominance in 2010 by allowing users to touch-up portraits and create new silhouettes for themselves. Meitu has 295 million monthly active users worldwide; however, the company has fallen behind more tech-savvy competitors in the face of growing digitization. Their stock price has decreased from $18HKD in 2017 to $3HKD in 2020.

As the company’s directors are not shy of emphasizing their appreciation for blockchain technology, it’s no surprise that Meitu has invested such a substantial amount in cryptocurrencies. The company stated to the Hong Kong Stock Exchange that “cryptocurrencies have ample room for appreciation in value” and see such investment as an opportunity to seek alternative ways to grow after turning 13. Cai Wensheng, one of Meitu’s chairmen and a highly vocal advocate for cryptocurrencies and blockchain technology, has argued that “blockchain is a catalyst for the technological revolution.” So, it’s no wonder the company he is overseeing has invested in Bitcoin. In 2018, a big pump occurred after the same billionaire purchased 10,000 bitcoins. And his investment paid off for him in the long run.

Who’s Benefiting From This?

So, why are big tech giants investing in blockchain technology or crypto? They’re doing it to implement an innovative culture that embraces technological advancements within their companies, for starters. As seen in 2021, only a handful of companies invested and became vocal about their investment. Secondly, some might already have personally invested in cryptocurrencies, and as they consolidate their price, their long-term investment becomes more stable. Thirdly, as Meitu also stated, their interest in Ethereum will help their new endeavor to integrate blockchain into their overseas businesses.

China has blocked off all ICOs and exchange listings as of 2018, and Meitu disclosed their investment “will reside with renowned cryptocurrencies trading platform(s) engaged by the group with good security measures set up.” Their current plan is to HODL, meaning the price of Bitcoin and even Ethereum, for that matter, will remain stable in the short term.