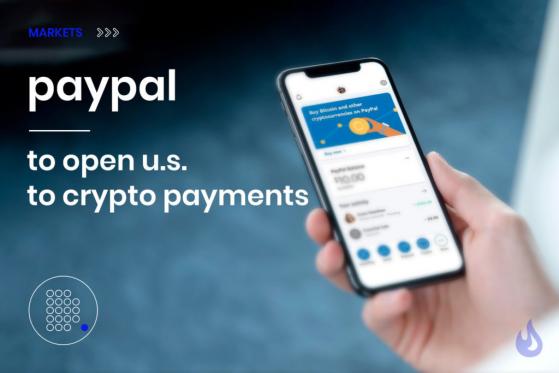 Reports trickling in indicate that PayPal will soon officially unveil a new service for millions of its American users.

PayPal plans to allow U.S. consumers to use their cryptocurrency holdings to pay for goods and services on the platform in a move that shows the company’s belief in blockchain technology and digital currencies.

Over 29 million merchants around the world will support this new system of payment, but, for now, only U.S. consumers will have the ability to use the upgrade.

PayPal Is Forging Ahead

PayPal is among the leading firms in the world incorporating the wonders of blockchain technology with its traditional payment services to usher in a new age of decentralization in the financial sector.

Early reports indicate that PayPal will officially allow U.S. consumers to use cryptos as a checkout option on 29 million merchant sites globally.

Ahead of the official unveiling, Dan Schulman, the president and CEO of PayPal, referred to the move as the first of its kind, saying it will allow for the “seamless use of cryptocurrencies in the same way as a credit card or a debit card inside your PayPal wallet.”

Cryptocurrencies that will be supported by this proposed move include Bitcoin, Ether, Bitcoin Cash, and Litecoin.

Holders of these cryptocurrencies in PayPal’s digital wallets will have the ability to convert their coins into fiat currency during checkout.

Despite the wide applicability of the service, it will only initially be available for consumers in the U.S., but we could soon see its deployment in several locations around the world.

The development by PayPal is coming after Tesla (NASDAQ:TSLA) announced that it now receives payment for its cars with Bitcoin, although this is distinct from PayPal’s proposed model.

The PayPal model will involve the conversion of the cryptocurrency to fiat at the point of checkout.

PayPal’s proposed announcement isn’t a random event. Instead, it comes as a result of long-term planning and several early forays across the frontiers of cryptocurrencies.

The new announcement builds upon PayPal’s earlier decision to allow its users to buy, sell, and hold cryptocurrencies. It seems like the decision to allow consumers to pay with cryptos could be the end game strategy of the California-based company, or it could just be the tip of the iceberg.

Earlier this month, PayPal acquired crypto custodial and security company Curv for around $200 million, and way back in 2017, PayPal put together a research team to explore the nascent blockchain technology.

The recent development by the payment giants is a product of a well-thought-out plan to fully harness the benefits of cryptocurrencies to provide the utmost satisfaction for its users.