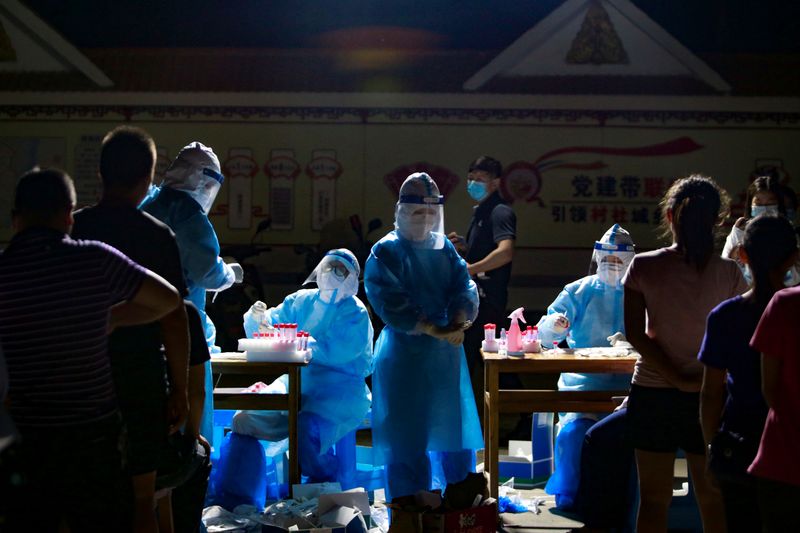 © Reuters. FILE PHOTO: Medical workers attend to people lining up for nucleic acid testing at a residential compound in Ruili

BEIJING (Reuters) – The top Communist Party official of a city in China’s southwestern Yunnan province was dismissed from his post due to what the provincial government called a “serious dereliction of duty” in failing to prevent COViD-19 outbreaks in recent months.

Yunnan’s government said in a statement on Thursday that three separate COVID-19 outbreaks occurred within a half-year period in Ruili city, which borders Myanmar, under the watch of city’s party chief, Gong Yunzun.

The outbreaks, including a cluster that emerged last week, “severely affected” Yunnan and China’s epidemic prevention efforts and harmed the province’s economic and social development, the statement said, adding that Gong’s dismissal should serve as a warning.

The city is a key transit point for Yunnan, which has struggled to monitor its rugged 4,000 km (2,500-mile) border with Laos, Myanmar and Vietnam for illegal immigration amid a wave of unauthorised crossings last year by people seeking a haven in China from the pandemic.

The number of new asymptomatic cases, which China does not classify as confirmed cases, fell to six from eight cases a day earlier.