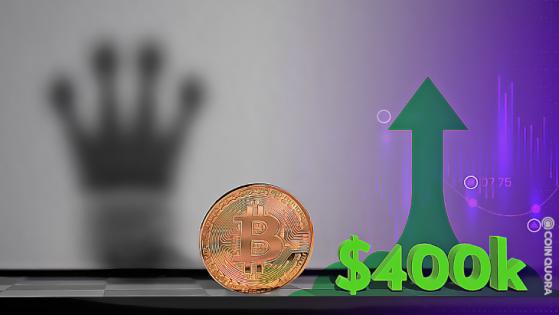 Bitcoin Could See Huge Surge From Current Value to $400K

According to Bloomberg strategists, the price of Bitcoin could spike multi-fold from its current value to $400,000 due to increased institutional adoption. Moreover, they also noted that BTC is replacing gold.

In addition, if Bitcoin could replicate its highs in 2013 and 2015 it would reach several hundred thousand dollars.

Bitcoin adoption seems to have picked up rather suddenly than gradually and is most likely to accelerate. Moreover, companies such as Morgan Stanley (NYSE:MS), Visa (NYSE:V), Goldman Sachs (NYSE:GS), Tesla (NASDAQ:TSLA), and more have begun widely adopting BTC.

According to Senior Commodity Strategist, Mike McGlone, $50,000 is the price level for baseline support. Additionally, the key resistance is indicated by the $60,000 mark. CoinGecko states that the BTC price is trading at $60,127 with a 24-hour trading volume of $44.89 billion, at the time of writing.

Even more, by representing the past patterns, the strategist predicted a significant price increase right around the corner. Furthermore, if the primary cryptocurrency sees such a spectacular price level, its market capitalization will spike over $7 trillion.

Notably, this will make Bitcoin 3-times more worthy than Apple (NASDAQ:AAPL) and will close the gap with gold’s market cap. All in all, like any investment, previous performances are not a sign for future gain. However, some analysts believe that Bitcoin’s trajectory is strongly upward.

This article was first published on coinquora.com