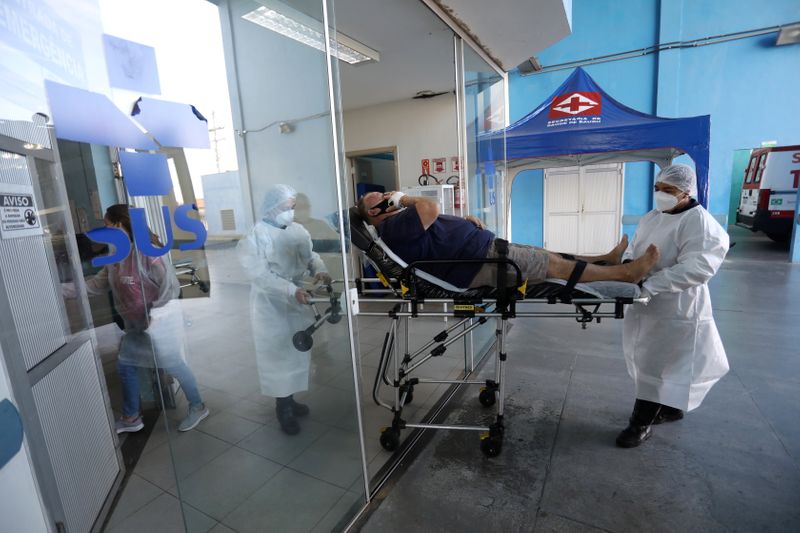 © Reuters. Outbreak of the coronavirus disease (COVID-19) in Bauru

RIO DE JANEIRO (Reuters) – Brazil’s P1 coronavirus variant, behind a deadly COVID-19 surge in the Latin American country that has raised international alarm, is mutating in ways that could make it better able to evade antibodies, according to scientists studying the virus.

Research conducted by the public health institute Fiocruz into the variants circulating in Brazil found mutations in the spike region of the virus that is used to enter and infect cells.

Those changes, the scientists said, could make the virus more resistant to vaccines – which target the spike protein – with potentially grave implications for the severity of the outbreak in Latin America’s most populous nation.

“We believe it’s another escape mechanism the virus is creating to evade the response of antibodies,” said Felipe Naveca, one of the authors of the study and part of Fiocruz in the Amazon (NASDAQ:AMZN) city of Manaus, where the P1 variant is believed to have originated.

Naveca said the changes appeared to be similar to the mutations seen in the even more aggressive South African variant, against which studies have shown some vaccines have substantially reduced efficacy.

“This is particularly worrying because the virus is continuing to accelerate in its evolution,” he added.

Studies have shown the P1 variant to be as much as 2.5 times more contagious than the original coronavirus and more resistant to antibodies.

On Tuesday, France suspended all flights to and from Brazil in a bid to prevent the variant’s spread as Latin America’s largest economy becomes increasingly isolated.

The variant, which has quickly become dominant in Brazil, is thought to be a large factor behind a massive second wave that has brought the country’s death toll to over 350,000 – the second highest in the world behind the United States.

Brazil’s outbreak is also increasingly affecting younger people, with hospital data showing that in March more than half of all patients in intensive care were aged 40 or younger.

For Ester Sabino, a scientist at the faculty of medicine of the University of Sao Paulo who led the first genome sequencing of the coronavirus in Brazil, the mutations of the P1 variant are not surprising given the fast pace of transmission.

“If you have a high level of transmission, like you have in Brazil at the moment, your risk of new mutations and variants increases,” she said.

So far vaccines, such as those developed by AstraZeneca (NASDAQ:AZN) and China’s Sinovac, have proven effective against the Brazilian variant but Sabino said further mutations could put that at risk.