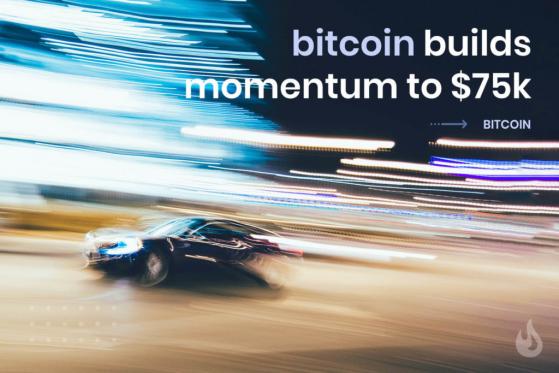 Bitcoin is continuing its brilliant run of form in 2021, breaking new records with the prospect of breaking even more. One of the prospects, which many investors and enthusiasts would love, would be seeing Bitcoin trade at $75k.

Bitcoin’s run has defied all odds and those critics who have been waiting since the start of the year for the Bitcoin bubble to burst. While they continue to wait, BTC is building even more momentum, looking at higher targets in the coming weeks.

At the start of this year, talk of Bitcoin at $60k would have been considered crazy by many. However, today, BTC currently trades above $62k while aiming higher, and the charts are in its favor.

Breaking above the $62,000 zone means that BTC has formed an ascending triangle pattern on the four-hour chart. Remaining above $62k could see BTC soar above $65k or possibly even higher in the short term. The only thing that could negate this trend is if BTC falls under $59,000.

If Bitcoin, and the entire crypto market, holds on to the bullish momentum, Bitcoin is bound to break out even higher. The first major mark it would reach would be $70k before moving higher to $75k. Even if the uptrend plays out, we should expect a short-lived pullback or two as Bitcoin journeys to new highs.

The crypto market joined Bitcoin for the bullish run as it climbed into uncharted territory on Wednesday morning, surpassing $2.23 trillion in market capitalization. The momentum builds as Coinbase makes its debut on Nasdaq.

Coinbase Is Now Live On Nasdaq

Coinbase, the most valuable crypto exchange with a market valuation of about $100 billion and 56 million verified retail customers, has opened on Nasdaq. Surprising many, Coinbase has avoided taking the initial public offering (IPO) route.

Instead of an IPO, Coinbase has opted for a direct listing. Direct listings are known for being cost-efficient and give existing shareholders the option of selling their shares right away. Coinbase opened on Nasdaq on Wednesday morning with a starting reference price of $250.

Coinbase’s debut on Nasdaq makes it the first major crypto business to list on the US stock market. Many analysts have attributed Bitcoin’s uptrend to Coinbase’s listing on Nasdaq.