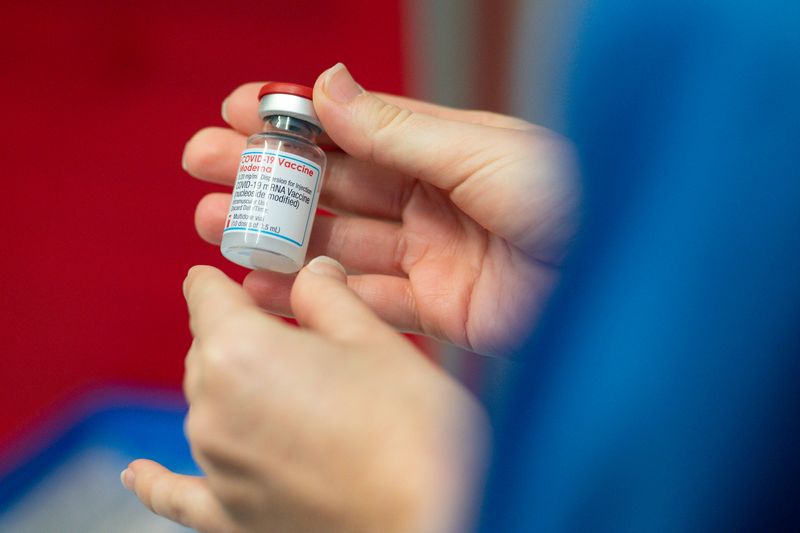 WASHINGTON (Reuters) – Moderna (NASDAQ:MRNA) Inc, looking to boost production of its COVID-19 vaccine, met with Nexus Pharmaceuticals to discuss manufacturing the shot at the company’s new plant in Wisconsin, which has the capacity to process and fill 30 million doses a month, sources with knowledge of the matter said.

The meeting between Moderna and the maker of specialty drugs took place on Tuesday, the sources said.

Even though President Joe Biden has said there would be enough vaccines for all adults in the United States by May, there could still be supply concerns later in the year, particularly if people require a booster shot at some point to protect against concerning virus variants that may be circulating.

“Moderna is looking to produce more vaccines … and Nexus has the capacity to do it,” one of the sources said.

Illinois-based Nexus does not currently manufacture COVID-19 vaccines but has built capacity to ramp up production at their new plant in Wisconsin, one of the sources said.

On Tuesday, Moderna said it was on track to deliver 300 million doses to the United States by the end of July, in line with its commitments. Moderna delivered 45 million vaccines to U.S. states in March.

Moderna’s chief executive on Wednesday said the company was unlikely to markedly speed up its vaccine production in the next few months, though it expects the output to have increased significantly by 2022.

Despite its efforts there have been significant setbacks.

For example, some 15 million doses of J&J’s vaccine were wasted due to contamination with ingredients from AstraZeneca (NASDAQ:AZN)’s shot at a Baltimore plant that was producing both. That Emergent BioSolutions facility will now produce only the J&J shot.

Separately, U.S. federal health agencies on Tuesday recommended pausing use of the J&J COVID-19 vaccine while it looks into six cases of rare brain blood clots in women under age 50 who received the shot.Moderna discusses COVID-19 vaccine manufacturing with Nexus Pharmaceuticals: sourcesAdd a Comment