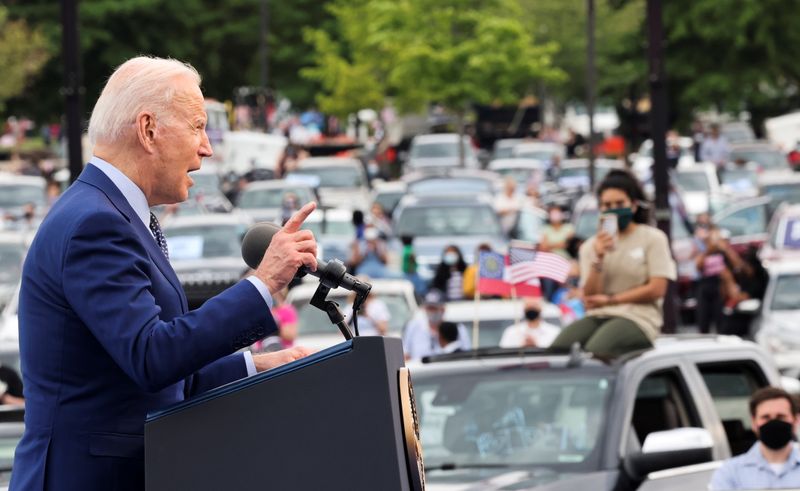 WASHINGTON (Reuters) – President Joe Biden will return on Friday to one of the cities that helped win him the White House as he works to gain popular support for $4 trillion in proposed programs to shore up the U.S. economy.

Biden’s trip to Philadelphia includes a stop at an event marking the 50th anniversary of Amtrak, the U.S. passenger rail service.

The Democrat is asking Congress for $80 billion in spending to improve train service, one of a wide set of initiatives included in multitrillion-dollar infrastructure, climate, childcare and other proposals Biden is trying to maneuver through a sharply divided Congress.

The spending would be paid for with higher taxes on the wealthy and corporations.

“In the 21st century, infrastructure isn’t just steel and concrete, it’s people,” Biden said at a campaign-style rally on Thursday in Georgia. “It’s about time the very wealthy and corporations start paying their fair share.”

Georgia and Pennsylvania mark the first and second stops on Biden’s “Getting America Back on Track Tour,” which are intended to build popular momentum for the policy proposals.

Republicans and even some Democratic lawmakers have balked at the price tag.

Former President Donald Trump, whom Biden defeated in the November election but who remains influential among Republicans, predicted in a phone interview with Fox Business Network on Thursday that higher taxes would prompt some companies to relocate abroad.

Strong support in the Atlanta and Philadelphia areas in the battleground states of Georgia and Pennsylvania, respectively, helped lift Biden to the presidency even though Trump won both states in the 2016 election.

Biden has long been associated with Amtrak because of his support for infrastructure subsidies as well as spending decades commuting daily on the 90-minute train ride between Washington and his home in Wilmington, Delaware, when he was a U.S. senator.Biden to focus on infrastructure with event celebrating trainsAdd a Comment