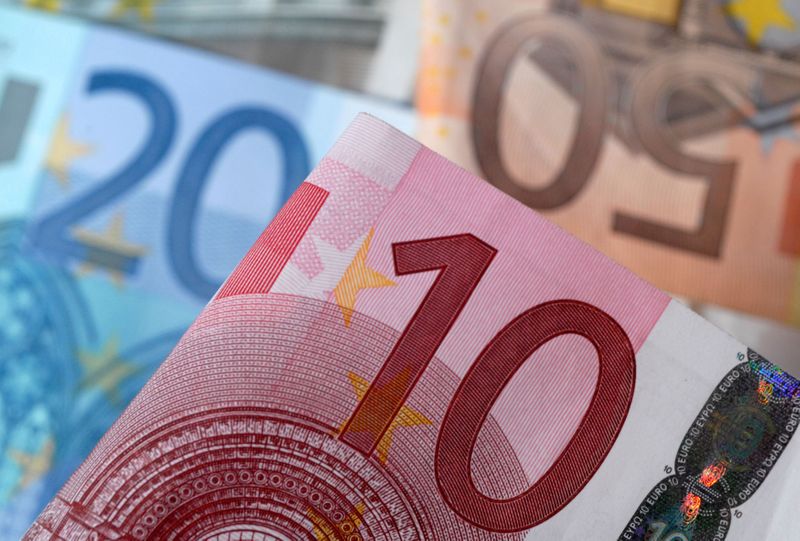 (Reuters) – Euro area government bonds have notched up their worst monthly performance against U.S. Treasuries in a year and investors are bracing for a bigger sell-off over coming months as the pace of vaccination finally picks up across the bloc.

Ten-year U.S. Treasuries’ yield premium over equivalent German bonds, a gauge often used to measure differences in economic outlook, shrank in April by the most since last March. It fell as low as 179 bps, from the highest in more than a year at over 200 basis points in early April.

The divergence is partly down to a Treasury rally that knocked U.S. yields off 14-month highs. But Bunds, with yields back to their highest since last March, have underperformed British, Australian and Japanese debt too.

For a graphic on Gap between 10-year U.S. Treasury and Bund yields:

For a graphic on Euro zone bonds underperform:

“It’s almost like the shoe that dropped in the U.S. is about to drop in Europe,” said Gerard Fitzpatrick, head of fixed income portfolio management at Russell Investments.

After a laggard start that dented the bloc’s economic outlook, vaccinations have gained pace in recent weeks. With supplies set to triple during this quarter, UBS economists predict 70% of the EU population will be vaccinated by September.

And major hurdles to fiscal stimulus are out of the way with Germany’s constitutional court declining to block ratification of the EU recovery fund.

Craig Inches, head of rates and cash at Royal London Asset Management, is considering adding to a ‘short’ position in Bunds, essentially positioning for a further sell-off as economies re-open.

“When you look at (yields) versus where the U.S., the UK are, they still look very very low,” he said.

For a graphic on European Union vaccinations speed up:

That brings into focus the European Central Bank, where hawkish policymakers have already called for slowing pandemic emergency bond purchases in the third quarter. While President Christine Lagarde called such talk premature, she also said any decision will be data-dependent.

This could cause a mini bond “tantrum” before the ECB’s June meeting, BofA analysts warn, where it will have to decide whether to slow stimulus.

While higher yields have boosted the appeal of U.S. Treasuries for yield-hunting Japanese investors, that may come at the expense of euro area bonds.

For the first time in around six years, Treasuries offer Japanese traders a higher return than Italian government bonds. Once they hedge against currency risks they can earn a 1.25% yield on 10-year Treasuries, four bps above lower-rated Italy.

Italian bonds lagged Treasuries this month for the first time since last April.

“The economic recovery in Europe will be more or less at the same speed as Japan’s,” said Akifumi Kai, general manager of investment planning at Dai-ichi Life Insurance.

For a graphic on FX hedged ret

But there are dissenters, who note the sheer scale of U.S. fiscal stimulus outstripping the EU’s. Andrea Iannelli, investment director at Fidelity International, prefers Bunds to Treasuries.

“Because of the much more careful management of the deficit, German bunds remain the only really scarce asset as far as European fixed income is concerned,” he said.Euro area bonds ‘next shoe to drop’ as vaccinations accelerate