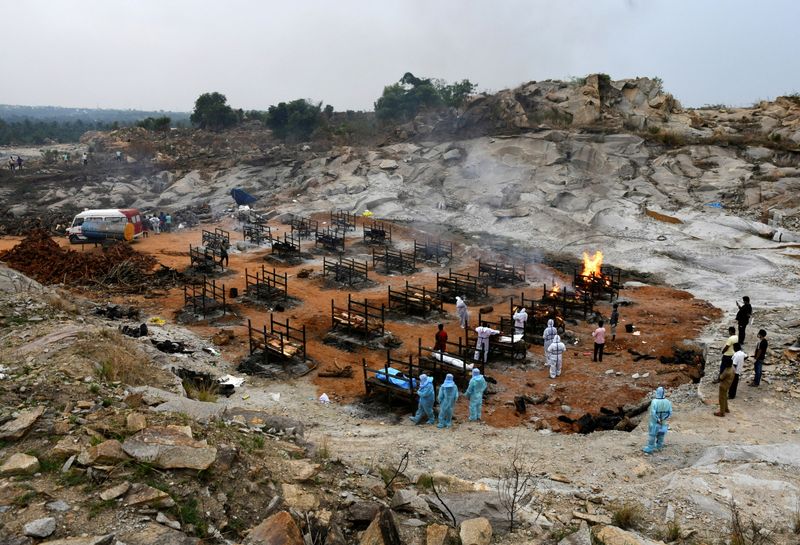 © Reuters. FILE PHOTO: Volunteers and relatives prepare to cremate the bodies of people who died due to the coronavirus disease (COVID-19), at a crematorium ground in Giddenahalli village on the outskirts of Bengaluru, India, May 2, 2021. REUTERS/Samuel Rajkumar

By Rajendra Jadhav and Sumit Khanna

SATARA/AHMEDABAD, India (Reuters) -India halted its hugely popular cricket league on Tuesday as COVID-19 infections surged past 20 million in the world’s second-most populous country and the opposition leader said a nationwide lockdown was now the only way out.

Cricket officials suspended the money-spinning Indian Premier League (IPL) as the pandemic spirals out of control, with the country adding 10 million cases in just over four months, after taking more than 10 months to reach the first 10 million.

“While we have tried to bring in some positivity and cheer, it is imperative that the tournament is now suspended and everyone goes back to their families and loved ones in these trying times,” the IPL said.

With hospitals running out of beds and oxygen and morgues and crematoria overflowing, experts say the actual numbers could be five to 10 times higher.

According to a Reuters tally, total infections were more than 20.2 million, second only to the United States.

“The only way to stop the spread of corona now is a full lockdown … GOI’s inaction is killing many innocent people,” opposition Congress leader Rahul Gandhi said on Twitter, referring to the government.

Prime Minister Narendra Modi’s government, widely criticised for allowing religious festivals and political gatherings attended by hundreds of thousands of largely unmasked people, is reluctant to impose a national lockdown for fear of the economic fallout, but several states have imposed social curbs.

The eastern state of Bihar ordered a lockdown until May 15, Chief Minister Nitish Kumar said. With more than 100,000 infections, its death toll is nearing 3,000, government figures show.

The IPL tournament, with an estimated brand value of $6.8 billion, was being played without spectators to a huge television audience in the cricket-obsessed nation but has been severely criticized for continuing while the healthcare system is falling apart.

The surge of the highly infectious Indian variant of the coronavirus has swamped hospitals and depleted supplies of oxygen, while sufferers have died in ambulances and car parks.

Rows of funeral pyres set up in parks and other open spaces are being used to cremate the overflow of corpses. A two-judge bench of the Delhi High Court has been holding almost daily video conferences to hear petitions from hospitals seeking oxygen and invoking India’s constitutional right to protection of life.

But some hope surfaced in comments on Monday by a health ministry official who said infections in some regions were levelling out.

Government modelling points to a peak by Wednesday, a few days earlier than thought, since the virus has spread faster than expected.

India’s surge has coincided with a dramatic drop in vaccinations due to supply and delivery problems.

At least three states, including Maharashtra, home to the commercial capital of Mumbai, reported scarcity of vaccines, shutting down some inoculation centres.

In Modi’s adjoining home state of Gujarat, the three largest cities of Ahmedabad, Surat and Vadodara limited vaccines to those aged between 18 and 44, officials said.

The eastern state of Odisha also halted vaccinations in 11 of its 30 districts, health officials told Reuters.

“I am tired of standing in a queue,” said Anil Rajapure, a 49-year-old farmer in Maharashtra’s temple town of Wai, as he waited for his first shot.

“I will try one more time. If I don’t get it then, I will give up,” said Rajapure, adding that three earlier attempts had proved futile, either because stocks had run out or not arrived.

India, with the world’s biggest vaccine making capacity, has partially or fully immunised only 9.5% of its 1.35 billion people, according to the government’s Co-Win portal.

The coronavirus, widely believed to have crossed to humans from bats before it was first identified in central China in late 2019, has also infected eight lions at a zoo in the southern Indian city of Hyderabad, the federal government said.

The Asiatic lions had been isolated and were being treated, a statement added.India COVID cases top 20 million, halting cricket, prompting lockdown callAdd a Comment