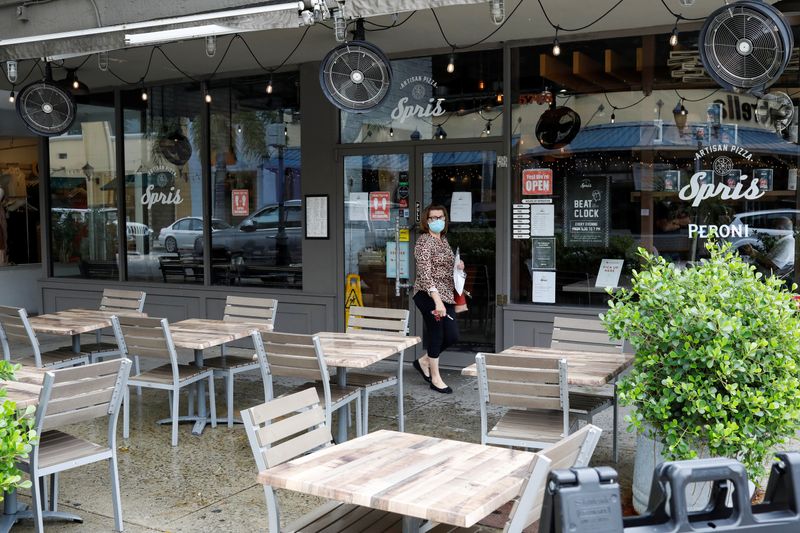 © Reuters. FILE PHOTO: A woman wearing a protective mask walks past empty tables outside a restaurant, as Miami-Dade County eases some of the lockdown measures put in place during the coronavirus disease (COVID-19) outbreak, in Miami, Florida, U.S., May 18, 2020. RE

WASHINGTON (Reuters) – U.S. services industry activity grew at a slightly slower pace in April, likely restrained by shortages of inputs amid a burst of demand that is being driven by massive fiscal stimulus and a rapidly improving public health environment.

The Institute for Supply Management (ISM) said on Wednesday its non-manufacturing activity index fell to a reading of 62.7 last month from 63.7 in March, which was the highest on record.

A reading above 50 indicates growth in the services sector, which accounts for more than two-thirds of U.S. economic activity. Economists polled by Reuters had forecast the index rising to 64.3 in April.

The findings mirrored the ISM’s manufacturing survey published on Monday showing bottlenecks in the supply chain constraining factory activity in April. The economy is experiencing a boom in demand, thanks to the White House’s massive $1.9 trillion pandemic relief package and the expansion of the COVID-19 vaccination program to all adult Americans.

Federal Reserve Chair Jerome Powell said last week the U.S. central bank expected the bottlenecks would be resolved as workers and businesses adapted, adding “we think of them as not calling for a change in monetary policy.” The Fed has slashed its benchmark interest rate to near zero and is pumping money into the economy through bond purchases.

Inventories at businesses were drawn down in the first quarter as consumer spending soared. The economy grew at a 6.4% annualized rate in the January-March quarter after expanding at a 4.3% pace in the fourth quarter.

Most economists expect double-digit GDP growth this quarter, which would position the economy for growth of at least 7%, which would be the fastest since 1984. The economy contracted 3.5% in 2020, its worst performance in 74 years.

Demand for services could surge in the coming months as vaccinated Americans go on vacations and visit theaters, among other activities. Many states, including New York, New Jersey and Connecticut are lifting most of their coronavirus capacity restrictions on businesses.

The ISM survey’s measure of new orders for the services industry dropped to 63.2 in April from an all-time high of 67.2 in March. Backlogs of uncompleted work increased strongly, underscoring the impact of the supply constraints.

Inventories contracted and businesses boosted imports. They continued to pay more for inputs. The survey’s measure of prices paid by services industries rose to 76.8, the highest reading since July 2008, from 74.0 in March.

Its measure of services industry employment rose to 58.8 from 57.2 in March. That strengthens expectations for another month of blockbuster job growth in April. According to a Reuters survey of economists, nonfarm payrolls likely increased by 978,000 jobs last month after rising by 916,000 in March.