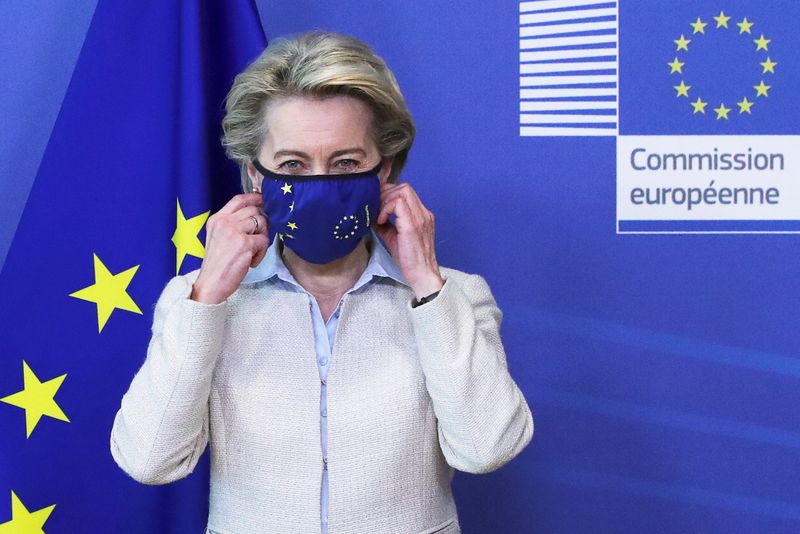 The head of the EU executive said the bloc’s vaccination effort was accelerating, with 30 Europeans being inoculated per second, while exporting more than 200 million vaccine doses to the rest of the world – contrasting with limited sharing of vaccines by the United States and Britain.

“The EU is also ready to discuss any proposals that address the crisis in an effective and pragmatic manner,” von der Leyen said in a speech to the European University Institute in Florence.

“That’s why we are ready to discuss how the U.S. proposal for a waiver on intellectual property protections for COVID-19 vaccines could help achieve that objective.”

French President Emmanuel Macron said he was “very much in favour” of opening up intellectual property. However, a French government official said lack of production capacity and upstream components was the problem, not patents.

“I would remind you that it is the United States which has not exported a single dose to other countries and which is now talking about lifting the patents,” the official said.

WAIVER SCEPTICS SAY IT WILL NOT BOOST PRODUCTION

South Africa and India made the initial vaccine waiver proposal at the World Trade Organization in October, gathering support from a large number of developing countries that say it is a vital step to make vaccines more widely available.

The World Health Organization said in April that of 700 million vaccines globally administered, only 0.2% had been in low-income countries.

Until now, the European Union has been with a group of countries, many of them home to large pharmaceutical companies, including Britain and Switzerland, that have opposed the waiver.

They argue it would undermine incentives for firms who have produced vaccines in record time to do so in a future pandemic. They also say waiving patents would not instantly resolve the problem, with a lack of sufficient manufacturing capacity.

Vaccine-making is also complicated, as evidenced by production problems of AstraZeneca (NASDAQ:AZN), and would also require a transfer of technology, know-how and personnel.

Von der Leyen said that, in the short run, the EU called upon all vaccine-producing countries to allow exports and to avoid measures that disrupt supply chains.

A Commission spokeswoman said this comment was not aimed at any country in particular.

The United States said on Wednesday it supported the waiver, although trade chief Katherine Tai cautioned that negotiations would take time.

The Commission only heard of the announcement moments before it came out, the spokeswoman said, adding that von der Leyen was open to discuss the waiver as well as other options that could be effective.

South Africa and India have said they will revise their waiver text ahead of the next WTO meetings on the topic later in May and on June 8-9.