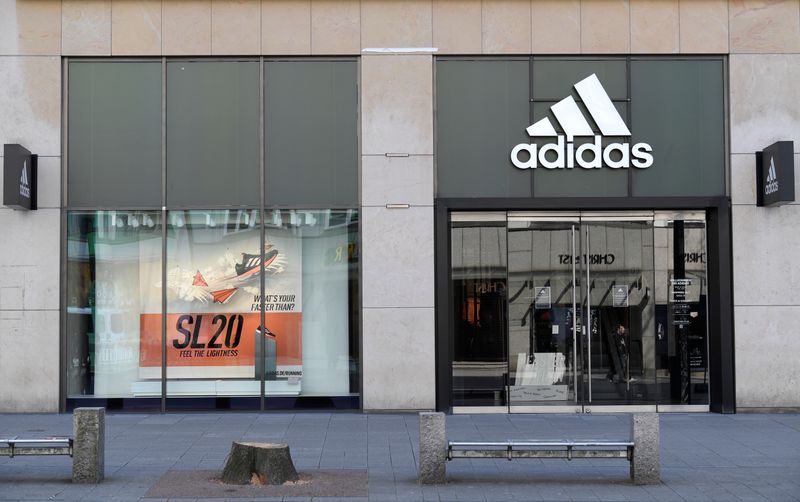 © Reuters. FILE PHOTO: A closed Adidas store is pictured during the spread of the coronavirus disease (COVID-19) in Hamburg, Germany March 28, 2020. REUTERS/Fabian Bimmer

BERLIN (Reuters) -German sportswear company Adidas (OTC:ADDYY) shrugged off Chinese calls in March for a boycott of its products and raised its 2021 sales forecast on Friday, saying it expects upcoming sporting events to drive strong demand for new products.

Adidas said it now sees sales growing at a high-teens percentage rate in 2021, compared with a March forecast for mid-to-high teens growth, with a jump of around 50% expected in the second quarter.

It said the acceleration would be driven by new products such as Ultraboost running shoes that are designed to be recycled, as well as big sports events like the European soccer championship and the Copa America.

Shares in Adidas, which had fallen in recent weeks on concerns about sales in China, were up 7% at 0728 GMT, the biggest gain on the German blue-chip index. Shares in rival Puma were also up 1.8%.

Western brands including Adidas, Nike (NYSE:NKE) and Puma faced online attacks in China in March over past statements saying they would not source cotton from Xinjiang after reports of human rights abuses against Uyghur Muslims. Beijing denies any such abuses.

Adidas did not directly mention the issue on Friday, beyond saying its new outlook took into account the geopolitical situation as well as the impact of prolonged lockdowns in Europe and industry-wide supply chain challenges.

Puma said last month it expected a consumer backlash against Western brands in China and congestion at ports to hit its sales, though it gave an upbeat outlook for 2021.

The company stuck to its forecast for 2021 net income from continuing operations to rise to 1.25-1.45 billion euros.