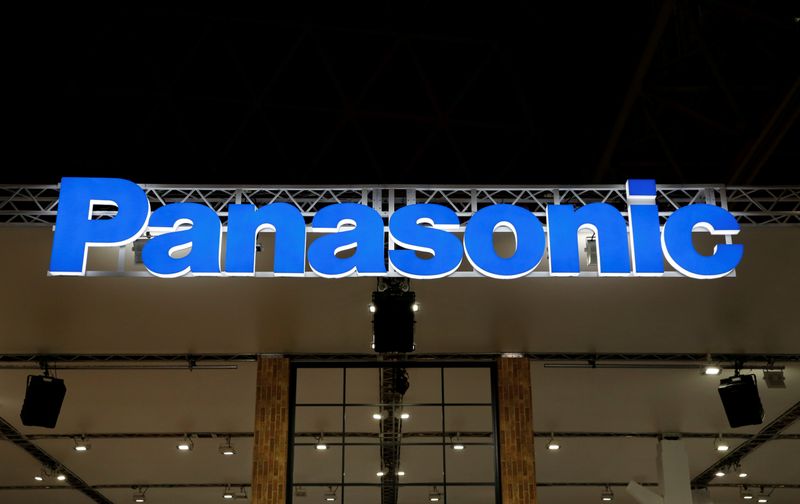 © Reuters. FILE PHOTO: A logo of Panasonic Corp is pictured at the CEATEC JAPAN 2017 (Combined Exhibition of Advanced Technologies) at the Makuhari Messe in Chiba, Japan, October 2, 2017. REUTERS/Toru Hanai

TOKYO (Reuters) -Panasonic Corp expects operating profit to jump by almost a third this business year as economic recovery from coronavirus lockdowns spurs demand for equipment and components, including automotive batteries used by Tesla (NASDAQ:TSLA), the company said on Monday.

The Japanese maker of items from bicycles to hair dryers is looking to tap growing demand for electric car batteries in key markets such as the United States and China through a decade-old partnership with Tesla Inc that is finally making money.

“The automotive batteries, which are nearly all Tesla account for around 40%,” Umeda said.

Panasonic forecast overall operating profit to rise 27.6% to 330 billion yen ($3 billion). The figure is slightly higher than an average forecast of 327.56 billion based on estimates from 16 analysts, Refinitiv data shows.

Tesla says that format, which is 46 millimetres wide and 80 millimetres tall, will store more energy, halve battery costs and help ramp up battery production 100-fold by 2030.

Panasonic Corp said last month it would acquire the shares of U.S. supply-chain software company Blue Yonder that it does not already own, in a $7.1 billion deal, its biggest in a decade.

For the quarter that ended on March 31, the Japanese industrial conglomerate posted operating profit of 31.8 billion yen ($292.09 million), down 40% from a year ago as weaker earnings from its life solutions unit, which sells lighting, equipment and materials for buildings, offset rising income from automotive components.

That result was better than an estimated average profit of 20.99 billion yen from five analysts surveyed by Refinitiv.