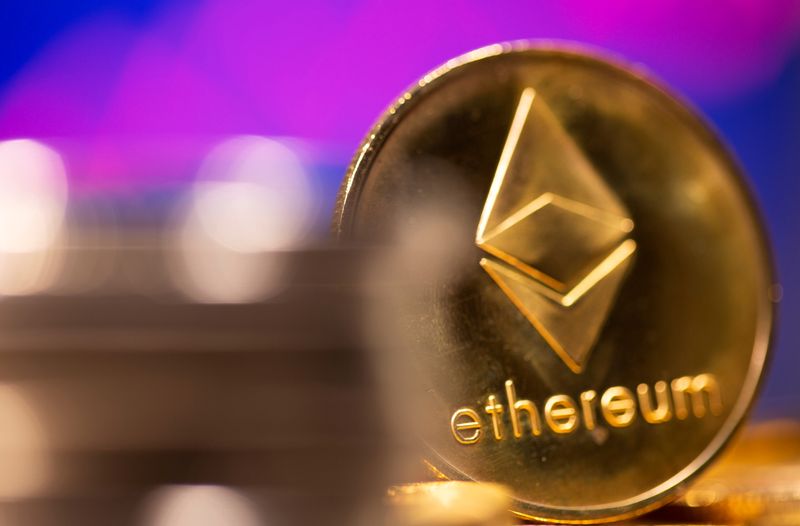 © Reuters. FILE PHOTO: A representation of virtual currency Ethereum is seen in front of a stock graph in this illustration taken February 19, 2021. REUTERS/Dado Ruvic/Illustration

LONDON/SINGAPORE (Reuters) -Cryptocurrency ethereum broke $4,000 for the first time on Monday, climbing to a new peak for a third day in a row on bets it may find new uses, although some analysts said it was overvalued at current levels.

Ethereum, the second-largest coin by market capitalisation, jumped more than 6% to just below $4,175, and was last up around 2%.

It has soared this year, fuelled by expectations of wider use, based in part on its role in decentralised finance – “DeFi” – platforms that facilitate crypto-denominated lending outside traditional banking.

An upcoming technical change to its software seen as reducing its supply has also provided a boost, while new institutional investors in the crypto sector have warmed to it amid a tepid quarter so far for bitcoin.

“(Crypto has) got a lot more institutional involvement than people who haven’t followed the market believe,” said Chris Weston, head of research at brokerage Pepperstone.

“And everyone’s been in ethereum. It’s not a meme joke coin, it actually has some application use,” he added, referring to its role in DeFi.

But some analysts said ethereum’s increasing valuation was not underpinned by data of how widely it is used.

“The continued divergence of its price relative to network activity raise questions about its valuation,” J.P. Morgan analysts wrote in a report to clients dated May 7.

Factors such as the number of active digital addresses in its network would be more consistent with a price of around $1,000, the U.S. bank said.

In the crypto world, the terms “ethereum” and “ether” have become synonymous. Technically, ethereum is the blockchain network in which applications are embedded, while ether is the token or currency that enables or drives the use of these applications.

Bitcoin, the largest cryptocurrency, rose to a three-week high above $59,600 on Monday. Dogecoin, a recent outperformer, stabilised after losses on Sunday after comments by Tesla (NASDAQ:TSLA) Inc chief Elon Musk on the Saturday Night Live TV show, where he said it was a “hustle”.

Smaller cryptocurrencies, like Dogecoin, known as “altcoins,” have been in demand in the past few weeks, pushing bitcoin’s share of the overall $2.5 trillion digital currency market to its lowest in around two years.

It was last trading at $0.51, after tumbling 38% in the last 24 hours on Musk’s comments. It later steadied after Musk’s commercial rocket company SpaceX said it would accept the meme-inspired cryptocurrency dogecoin as payment.

The meme-based coin has become the fourth-largest digital currency, with a market capitalisation of $69 billion, according to CoinMarketCap. It hit a record high on Thursday above $0.73.Second-biggest cryptocurrency ethereum breaks $4,000 to hit record highAdd a Comment