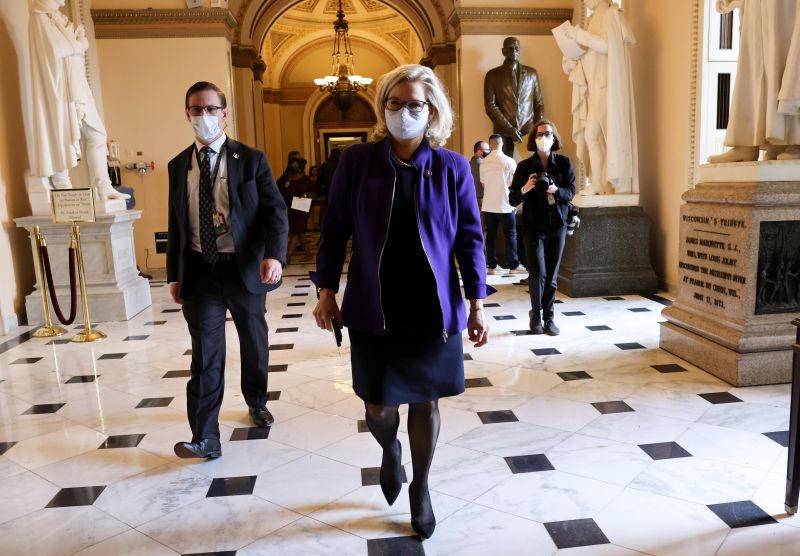 WASHINGTON (Reuters) -U.S. House Republicans met behind closed doors early on Friday to elect a successor to Liz Cheney, whom they ousted from their leadership team for criticizing Donald Trump’s false claims of election fraud, as they seek to move beyond internal power struggles.

It is unclear how successful that effort will be as Trump reasserts his dominance over the party and Cheney vows to continue to fight https://www.reuters.com/world/us/liz-cheney-vote-us-house-republicans-reach-watershed-over-trump-2021-05-12 to prevent him from winning the White House again in 2024. The former president has publicly flirted with the idea of another candidacy.

Republicans lost control of both houses of Congress during Trump’s one term in office, but he continues to seek revenge on elected Republicans he sees as disloyal.

That includes those like Cheney, who voted to impeach him after his supporters launched a deadly attack on the U.S. Capitol, and Senate Minority Leader Mitch McConnell, who said Trump was “morally responsible https://www.reuters.com/article/us-usa-trump-impeachment-republicans/after-not-guilty-vote-mcconnell-says-trump-morally-responsible-for-capitol-riot-idUSKBN2AD0OG&#8221; for the violence that left five dead.

The House’s 212 Republicans will choose between Trump-backed Representative Elise Stefanik https://www.reuters.com/world/us/loyalty-trump-catapults-elise-stefanik-into-republican-stardom-2021-05-11, who has compiled a somewhat moderate voting record during her six years in Congress, and Representative Chip Roy, who is appealing to rock-solid conservatives in the party.

The winner will chair the House Republican Conference, the party’s No. 3 leadership position.

Stefanik, 36, is now an outspoken Trump supporter, although she previously criticized some of his policies. She has come under fire from conservative members of the caucus for her moderate voting record. Among other things, she voted against Trump’s tax cut plan in 2017.

Roy, 48, a conservative member of the hard-right Freedom Caucus, jumped in the race at the last minute on Thursday. Trump immediately issued a statement criticizing Roy and raised the specter of a primary challenge.

Asked by reporters if he was concerned by Trump’s intervention, Roy sidestepped, asserting the question was “D.C. swamp business.” He said he had challenged Stefanik because “I think we should have debate.” He spoke after a candidates’ forum on Thursday evening.

Roy could attract some votes from the Freedom Caucus, but Stefanik supporter Representative Guy Reschenthaler insisted she still had “overwhelming” support. A poor showing by Stefanik would be a black eye for the remaining top House Republicans, Kevin McCarthy and Steve Scalise, as well as Trump, all of whom endorsed her.

Now free of her job as head of the Republican conference, Cheney, a lawmaker with impeccable conservative credentials and the daughter of former Vice President Dick Cheney, vows to steer the party away from a man she says is “pushing the lie” that his defeat in the 2020 election was the result of massive voter fraud.

Trump’s claim was rejected by multiple courts, state election officials and his own administration. Cheney calls him “an ongoing threat” to U.S. democracy.

House Republican leaders, along with many in their rank and file, pushed Cheney out on Wednesday because they had concluded her battle with Trump was distracting from attacks on Democratic President Joe Biden and threatening their prospects in the 2022 congressional elections.

Others in the party fear, however, that the ouster of Cheney might alienate independents and other wavering voters, especially with images of Trump supporters storming the Capitol still fresh in Americans’ minds.

Representative Kevin Brady, who has spent two decades in Congress, said Republicans had hoped they could have unified sooner.

“In the end, maybe everyone got what they want: Liz Cheney is free to pursue her disputes with President Trump,” and House Republicans are free to attack Democrats’ “socialist agenda,” he said.

A woman has held the No. 3 House Republican leadership job since 2013, as the party has tried to broaden its appeal to independent voters, including suburban women.U.S. House Republicans aim to move past Trump-Cheney battle with Friday leadership voteAdd a Comment