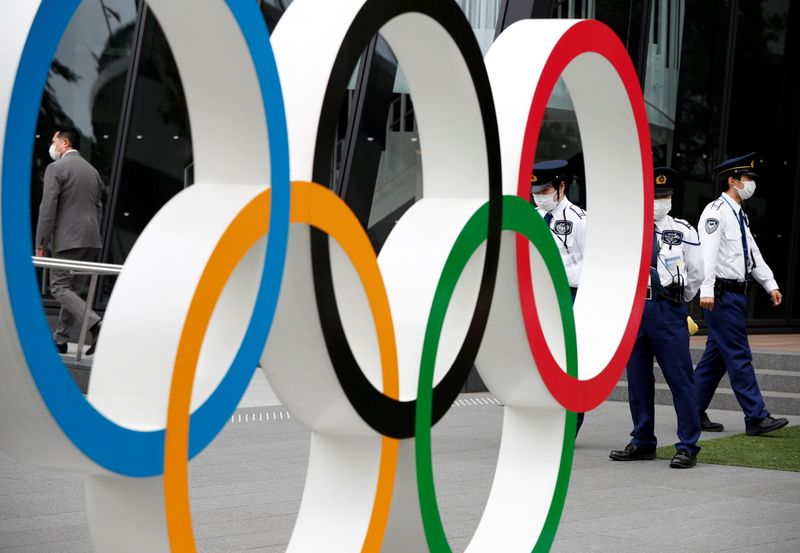 © Reuters. FILE PHOTO: Security personnel stand guard near the Olympic rings monument during a rally by anti-Olympics protesters outside the Japanese Olympic Committee headquarters, amid the coronavirus disease (COVID-19) outbreak, in Tokyo, Japan May 18, 2021. REUT

TOKYO (Reuters) – Less than 30% of Japan’s medics have been vaccinated against COVID-19 in major cities with just 65 days to go before the start of the Tokyo Olympics, the Nikkei newspaper reported on Wednesday, amid growing calls for the Games to be cancelled.

Cabinet figures released this week showed that three months into Japan’s COVID-19 vaccination push, less than 40% of all medical workers in the country were fully inoculated.

The problem is especially pronounced in Games host-city Tokyo and other large population centres, where the rate of fully vaccinated medical workers was less than 30%, the Nikkei reported.

Much of the supply of vaccine was concentrated in large hospitals, and there had been problems in the reservation systems for medical staff, the newspaper said.

The slow rollout for doctors and nurses has been among complaints cited by medical groups that have come out against holding the Games as Japan battles to contain a surge in infections.

The government is aiming to inoculate most of its 36 million people over the age of 65 by the end of July. To reach that target, the government hopes to deliver about 1 million shots a day, about three times faster than the current pace.

So far, just 3.7% of Japan’s population of 126 million have gotten at least one COVID-19 vaccine shot, the lowest rate among wealthy countries. Initially, the holdup was scant supplies of the vaccine developed by Pfizer Inc (NYSE:PFE) and BioNTech SE (NASDAQ:BNTX), the only one approved by regulators so far.

But inbound shipments of the Pfizer shot have increased dramatically in May, and the government is expected to approve Moderna (NASDAQ:MRNA) Inc’s candidate this week for use in mass vaccination centres.

The shot developed by AstraZeneca (NASDAQ:AZN) PLC is also being considered by domestic regulators.Most Japanese medical workers still not fully vaccinated as Olympics loomAdd a Comment