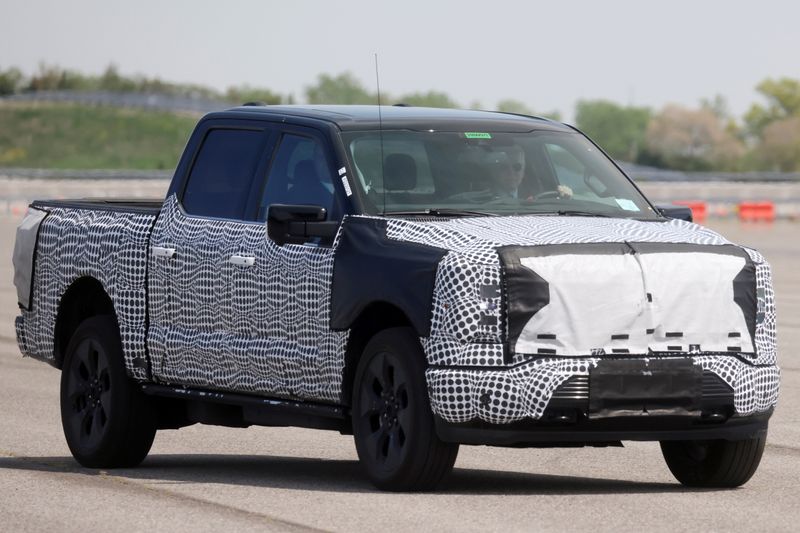 DETROIT (Reuters) – Ford Motor (NYSE:F) Co’s newly revealed electric version of its best-selling F-150 pickup doubles down on a bet that the company can beat Tesla (NASDAQ:TSLA) Inc and other rivals by giving new technology a familiar face and convincing long-time fleet and business customers that going electric saves money.

Ford officially unveiled the battery electric F-150 Lightning model on Wednesday evening, after giving it a cameo appearance during President Joe Biden’s visit on Tuesday to the Rouge manufacturing complex in Dearborn, Michigan, where the trucks will be assembled beginning next year.

Based on customer response, Ford has already moved to increase planned manufacturing capacity https://www.reuters.com/article/autos-ford-electric-idUKL1N2HV3DW for the electric F-150 by “tens of thousands” of vehicles a year, Ford’s head of Americas and International Markets, Kumar Galhotra, told Reuters ahead of Wednesday’s official debut. He did not disclose the new production targets.

Ford expects to boost annual production of the electric F-150 to 40,000 vehicles or more, starting in 2023, according to Sam Fiorani, head of global vehicle forecasting at AutoForecast Solutions.

Ford executives said ahead of Wednesday’s debut they have a different strategy for selling electric trucks and vans in volume from Tesla or General Motors Co (NYSE:GM)..

Where Tesla and GM are positioning their initial electric pickups as lifestyle vehicles for the affluent, Ford executives said they are focused on convincing commercial fleet operators – a market Ford dominates – that the F-150 Lightning and electric Transit are cost-effective, rational choices.

“That’s the only way you can build up the volume,” said Ted Cannis, Ford’s general manager for commercial vehicles.

The electric F-150 and an electric version of Ford’s Transit van due out late this year look like, and share many components with, the gasoline versions that are top-selling profit machines for the No. 2 U.S. automaker.

A “commercial base” version of Ford’s F-150 Lightning will start at $39,974 before tax credits, including a $7,500 federal tax credit Ford buyers can still get and Tesla and General Motors buyers cannot. That price is about $10,000 more than the cheapest gasoline-fueled F-150.

Besides an estimated 230 miles (370 km) of range, the base F-150 Lightning comes with a 15.5-inch (39.37 cm), Tesla-style dashboard screen, a roomy “frunk” storage space where the gas engine would be, and enough plugs and juice to power a construction site for up to three days, Ford officials said.

A Lightning XLT model, which aligns with the best-selling version of the gasoline F-150, will start at $52,974, Ford said. That is 51% higher than the gasoline XLT’s base price.

Ford plans more expensive versions of the F-150 Lightning, including a “Platinum” model with an extended-range battery likely to be priced around $90,000.

Tesla’s electric Cybertruck, which looks like it rolled off the set of a science-fiction movie, is due to begin high-volume production in 2022, and its price will start at $39,900. GM’s first electric pickup is an “electric supertruck,” the GMC Hummer EV, priced from $79,995 to nearly $100,000. High-volume production will begin in fall 2022, after a small initial run of trucks this autumn.

GM plans to introduce a Lightning competitor, the Chevrolet Silverado EV, in late 2022, Fiorani said. It will be built on a dedicated electric vehicle platform that it shares with the upcoming Hummer EV, GM has said.

GM is also moving into the electric delivery van segment with a new unit, BrightDrop, and a new purpose-built electric van.

Ford is using a heavier-gauge steel for the frame of the F-150 Lightning, but did not undertake a complete redesign to integrate the battery pack into the chassis.

By staying close to the current model, Ford can offer the electric truck sooner, at a competitive price “and make money on it,” said Darren Palmer, general manager for Ford’s electric vehicles.

Once Ford starts charging for these services, “then you’re in the subscription game,” Cannis said.Ford wires its electric trucks for business customers1