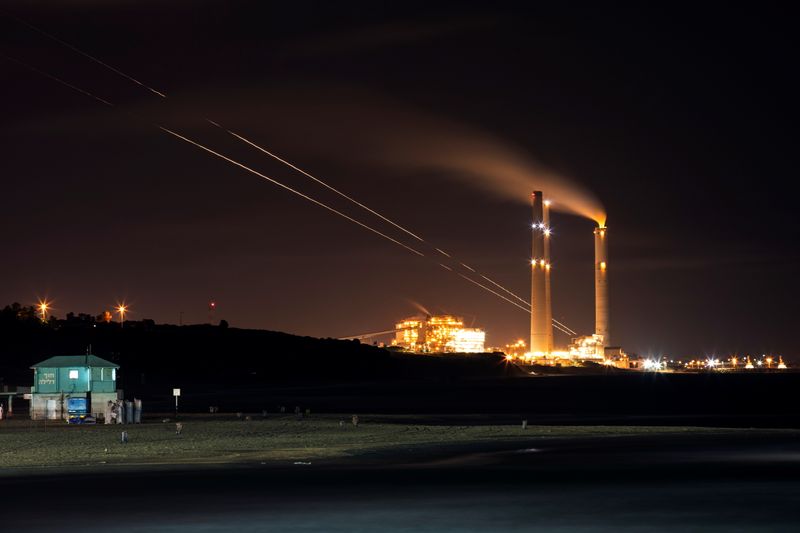 © Reuters. Streaks of lights are seen from Ashkelon as rockets are launched from the Gaza Strip towards Israel May 19, 2021 REUTERS/ Amir Cohen

By Nidal al-Mughrabi and Jeffrey Heller

GAZA (Reuters) -Diplomatic moves towards a ceasefire in the Israeli-Palestinian conflict gathered pace on Thursday after U.S. President Joe Biden called for a de-escalation, but Israel kept up its bombardment of Gaza and Hamas rocket fire resumed after a pause.

A senior official in the Hamas militant group predicted a ceasefire within days. An Israeli minister said Israel would halt its offensive only when it had achieved its goals.

Rocket attacks on Israel stopped for eight hours on Thursday – the 11th day of hostilities – before resuming against communities near the Israel-Gaza border.

Israel continued its air strikes in Hamas-run Gaza, saying it wanted to deter the Islamist group from future confrontation after the current conflict halted.

Since the fighting began on May 10, health officials in Gaza say 230 Palestinians, including 65 children and 39 women, have been killed and more than 1,700 wounded in aerial bombardments.

Israeli authorities put the death toll to date at 12 in Israel, with 336 people treated for injuries in rocket attacks that have caused panic and sent people rushing into shelters.

Biden on Wednesday urged Israeli Prime Minister Benjamin Netanyahu to seek a “de-escalation”. An Egyptian security source said the sides had agreed in principle to a ceasefire but details needed to be worked out.

A Hamas political official, Moussa Abu Marzouk, said he believed the efforts to reach a ceasefire would succeed.

“I expect a ceasefire to be reached within a day or two, and the ceasefire will be on the basis of mutual agreement.”

Asked on Israel’s Kan public radio if a truce would begin on Friday, Intelligence Minister Eli Cohen said: “No. We are definitely seeing very significant international pressure… we will finish the operation when we decide we have attained our goals.”

Israel carried out over a dozen air strikes on Gaza after midnight, targeting what it said was a weapons storage unit in the home of a Hamas official, and military infrastructure in the homes of other commanders from the group.

Hamas-run radio said a woman was killed and four children were wounded in one attack on the town of Khan Younis in southern Gaza. Witnesses said several main roads were also damaged in the air strikes.

In the Gaza City suburb of Sabra, Amira Esleem, 14, and three family members were wounded in one Israeli attack, which she said caused parts of their house to collapse.

“We were sitting on the sofa when a missile landed. There was heavy smoke and we couldn’t see anything,” she said from her hospital bed.

Nearly 450 buildings in Gaza have been destroyed or badly damaged, including six hospitals and nine primary care health centres, the United Nations humanitarian agency has said. More than 52,000 people have fled their homes in Gaza, which is blockaded by Israel and Egypt.

Israelis living in areas frequently targeted by rocket fire began their workday on Thursday without the usual sound of warning sirens. But after an eight-hour break, the sirens blared again in southern Israel. No casualties or damage were reported.

Israel said some 4,000 rockets have been launched at it from Gaza, some falling short and others shot down by its Iron Dome air defences.

Civilians on both sides are exhausted by fear and grief, the International Committee of the Red Cross said. “People in Gaza and Israel urgently need respite from non-stop hostilities,” said Fabrizio Carboni, regional director for the Middle East.

Washington and several Middle East governments have sought an end to the violence through diplomacy. The United Nations General Assembly was due to meet on the conflict on Thursday with several foreign ministers taking part, but it was not expected to take action.

The U.S. mission said it would not support a French call for a resolution in the 15-member U.N. Security Council, saying it believed such actions would undermine efforts to de-escalate violence.

Any ceasefire is unlikely to address the fundamental issues in the Israeli-Palestinian conflict.

An international peace process aimed at creating a Palestinian state free of Israeli occupation and guaranteeing Israel’s security has been frozen since 2014.

Hamas, regarded by the West as a terrorist organisation, has not been part of the mainstream Palestine Liberation Organization’s engagement with Israel, which led to interim peace deals in the 1990s and the establishment of limited Palestinian self-rule in the occupied West Bank.

The U.N. Human Rights Council said it will hold a special session on May 27 to address “the grave human rights situation” in the Palestinian territories, including East Jerusalem.

Hamas began firing rockets on May 10 in retaliation for what it called Israeli rights abuses against Palestinians in Jerusalem during the Muslim holy month of Ramadan.

The rocket attacks followed Israeli police clashes with worshippers at al-Aqsa Mosque in Jerusalem and efforts by Israeli settlers to evict Palestinians from a neighbourhood in Israeli-annexed East Jerusalem.

The hostilities are the most serious between Hamas and Israel in years, and, in a departure from previous Gaza conflicts, have helped fuel street violence in Israeli cities between Jews and Arabs.

The conflict has also stoked violence in the West Bank, where Palestinian officials said at least 21 Palestinians have been killed in clashes with Israeli troops or other incidents since May 10.Renewed violence over Gaza despite ceasefire moves gaining speed