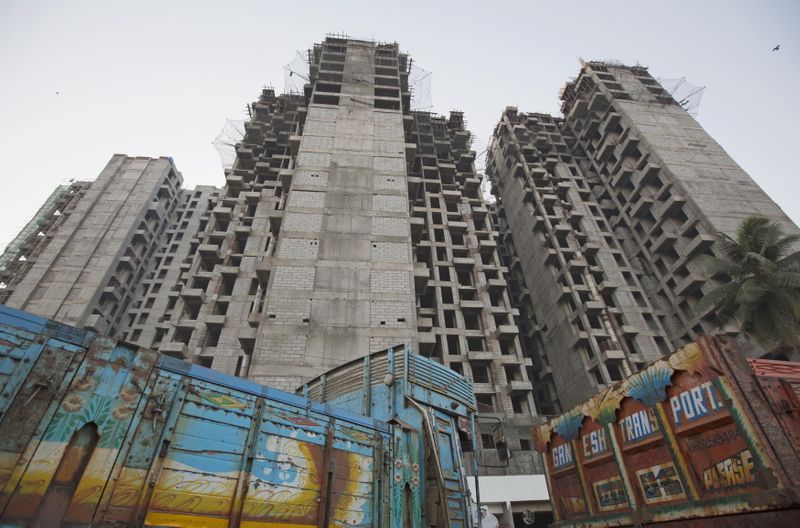 © Reuters. FILE PHOTO: Trucks are parked at the site of an under-construction residential building project, which has been stalled, in Mumbai March 19, 2015. REUTERS/Danish Siddiqui

By Swathi Nair and Manjul Paul

BENGALURU (Reuters) – Indian house prices will stagnate this year, hurt by a devastating second wave of the coronavirus which has crushed demand and offset government tax rebates and incentives for property developers, a Reuters poll showed.

Asia’s third-largest economy has become the global epicentre of the pandemic, with around 26 million cases and about 290,000 deaths so far, pushing several states to reimpose restrictions, stalling business activity.

That means average house prices will stagnate this year, according to the May 11-19 poll of 12 analysts, a downgrade from an already modest 1.3% rise expected in the previous poll in January. Four analysts penciled in a decline in house prices this year.

The latest forecast for no growth in house prices suggests a decline in real terms with Indian consumer price inflation running over 4% and expected to average 4.9% this year. [ECILT/IN]

“2021 will continue to remain subdued due to the ongoing economic distress caused by the massive second wave, and also due to fear of a third wave of the pandemic,” said Arvind Nandan, managing director of research at Savills India.

“The housing market has been strongly affected on various fronts due to the pandemic. Several (property) registrations had come to a halt due to lockdowns. The demand-side has slumped owing to cashflow problems and reserve depletion among buyers.”

All but one of 12 respondents said the coronavirus crisis posed a high risk to their already-dim housing market outlook. The other analyst said the risk from the pandemic was low.

Indian housing market activity was slowing from a cash crunch even before the pandemic took hold in 2020. When asked what was likely this year, seven of 11 analysts expected a further slowdown.

“Given the impact of the second wave and forecast of a third wave, buyers will take a more cautious approach before committing capital for home purchases,” said Ajay Sharma, managing director at Colliers International.

“Since demand-side factors are not encouraging, the developers have either maintained or slightly corrected pricing to ensure the infused demand provided by statutory rebates are sustained in the current year.”

While Indian house prices were expected to rise 3.0% on average next year, it was a downgrade from 4.5% growth predicted in the previous poll.

A regional breakdown showed home prices this year in Delhi, the National Capital Region, Mumbai and Chennai would fall 2.0%, 2.5%, 1.5% and 1.0%, respectively, compared to no growth expected previously.

Housing prices in Bengaluru, dubbed India’s Silicon Valley for its tech firms and startups, were forecast to decline 1.0%, a reversal from a 2.5% rise expected previously.

But eight of 11 analysts said demand for office space would increase over the next few years, including one who said it would be a significant increase. Three respondents said it would decrease.