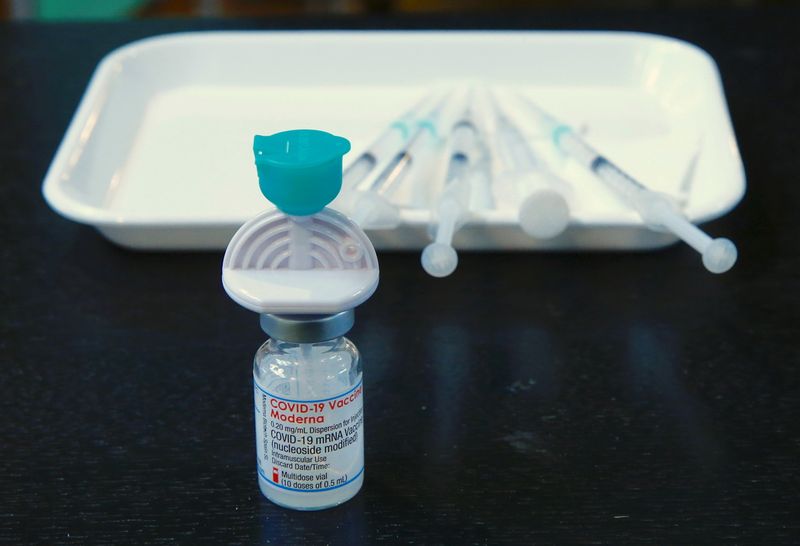 © Reuters. FILE PHOTO: A vial containing the Moderna COVID-19 vaccine is seen at a temporarily vaccination center of Swiss Medix health center as the spread of the coronavirus disease continues, in the Offene St. Jakob Kirche Reformed church in Zurich, Switzerland

TOKYO (Reuters) -Japan is set to expand a state of emergency to cover the southern island of Okinawa on Friday, just as it approved two more novel coronavirus vaccines to speed up its lagging inoculation campaign.

After health regulators’ green light a day earlier, the government said it approved vaccines developed by Moderna (NASDAQ:MRNA) Inc and AstraZeneca (NASDAQ:AZN) PLC, which will join that developed by Pfizer Inc (NYSE:PFE) together with BioNTech SE (NASDAQ:BNTX) in a vaccination drive that began in mid-February.

Local media reported that the government was unlikely to use the AstraZeneca shots for the time being due to concerns over blood clots. Japan has arranged to buy 120 million doses of the British-Swedish drugmaker’s vaccine.

Japan has so far vaccinated just 4.1 million of its population, according to Reuters’ global tracker https://tmsnrt.rs/3vbj5CE, the slowest rate among the world’s larger, rich countries.

In contrast to some other Group of Seven (G7) countries that are beginning to end pandemic-busting lockdown measures, much of Japan remains under emergency curbs amid a fourth wave of the virus.

On Friday, medical experts approved the government’s proposal to add the southern prefecture of Okinawa to its list of prefectures subject to the strictest emergency measures. That would take the list to 10 prefectures including Tokyo, host of the Olympic Games starting in about two months.

The state of emergency for Okinawa, widely expected to be formalised later on Friday, would run for about a month from Sunday through June 20, economy minister Yasutoshi Nishimura said, beyond the May 31 end of the other nine.

The move would mark the third consecutive week that Japan has expanded the state of emergency.

Japan has so far recorded about 695,000 novel coronavirus infections and 12,000 COVID-19 deaths – much fewer than many countries – but its medical system is increasingly strained by a spike in more infectious variants of the virus.

With the Olympics starting on July 23, Tokyo is under particular pressure to bring infections and strain on the medical system down from the most dire “Stage Four” level and emerge from a state of emergency as scheduled this month.Japan approves more COVID-19 vaccines as state of emergency set to widenAdd a Comment