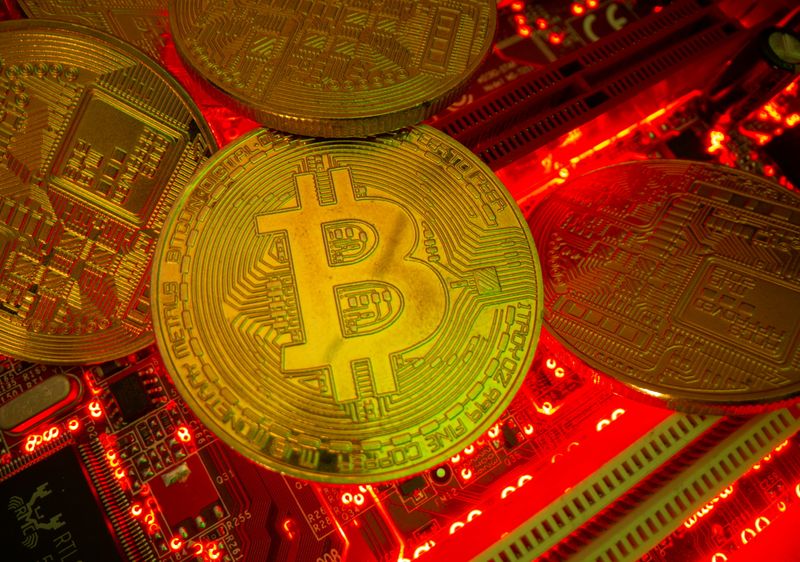 © Reuters. FILE PHOTO: Representations of the virtual currency Bitcoin stand on a motherboard in this picture illustration taken May 20, 2021. REUTERS/Dado Ruvic/Illustration

LONDON/SINGAPORE (Reuters) -Cryptocurrencies fought back on Monday, clawing back ground after a bout of weekend selling fuelled by further signs of a gathering Chinese crackdown on the emerging sector.

The catalyst for the slump was cryptocurrency “miners”, who mint cryptocurrencies by using powerful computers to solve complex maths puzzles, halting Chinese operations in the face of increasing scrutiny from authorities.

The attention on Chinese miners – who account for some 70% of supply – is the latest front in a wider push by Beijing against the cryptocurrency sector.

Major cryptocurrency exchange Huobi on Monday suspended both crypto-mining and some trading services to new clients from mainland China, adding it would instead focus on overseas businesses. Others also suspended business in China.

In the short-term, market players said, that is likely to lead to pressure on prices as miners sell bitcoin held on their balance sheets.

“If they are pulling up stakes or shutting down, they may need to reduce their balance sheets in the short term,” said James Quinn, managing partner at Q9 Capital, a Hong Kong-based cryptocurrency private wealth manager.

“We tend to expect some stabilisation over the next week, which should translate into a bounce, but nobody’s really sure about what happens next,” said Joseph Edwards, head of research at crypto brokerage Enigma Securities.

“Crypto clearly finds itself in a tough spot in terms of the narrative right now, and it’s taken a lot of oxygen out of the room.”

Bitcoin had stabilised from a bruising week on Saturday after Tesla (NASDAQ:TSLA) boss Elon Musk – whose comments on cryptocurrencies have been a key price driver in recent months – tweeted support for crypto in “the true battle” with fiat currencies.

Yet after last week’s 25% drop, triggered in part by toughening language from Chinese regulators, bitcoin remains almost 45% below last month’s record high of $64,895.

Its slump has pulled bitcoin roughly back to its level before Tesla unveiled in February a $1.5 billion bitcoin purchase and made a since-reversed decision to accept it as payment.

Ether has fallen by half in just 12 days since its peak of $4,380, with other smaller cryptocurrencies such as dogecoin also suffering heavy declines.Bitcoin fights back after Sunday sell-off9Comments (9)