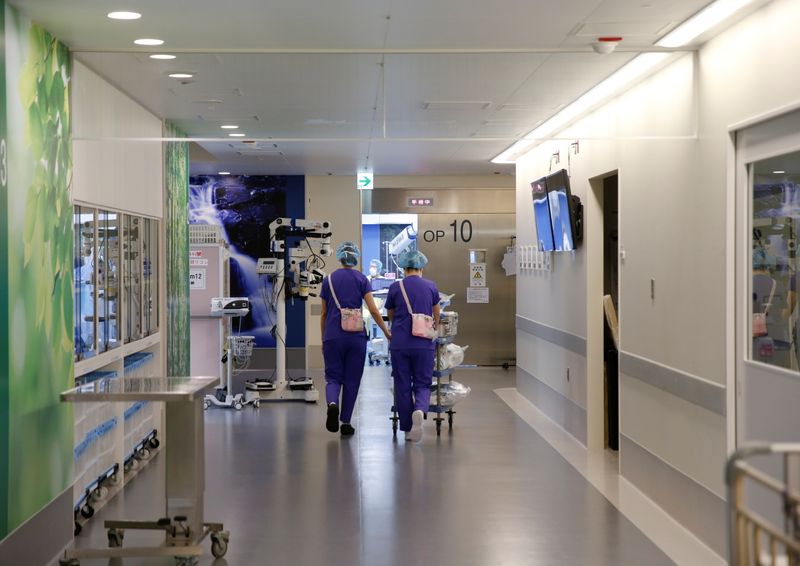 © Reuters. Medical workers at Osaka Medical and Pharmaceutical University Hospital work in the operation wing of the hospital, amid the coronavirus disease (COVID-19) outbreak, in Takatsuki, Osaka prefecture, Japan May 17, 2021. REUTERS/Akira Tomoshige

OSAKA, Japan (Reuters) – Hospitals in Japan’s second largest city of Osaka are buckling under a huge wave of new coronavirus infections, running out of beds and ventilators as exhausted doctors warn of a “system collapse”, and advise against holding the Olympics this summer.

Japan’s western region home to 9 million people is suffering the brunt of the fourth wave of the pandemic, accounting for a third of the nation’s death toll in May, although it constitutes just 7% of its population.

The speed at which Osaka’s healthcare system was overwhelmed underscores the challenges of hosting a major global sports event in two months’ time, particularly as only about half of Japan’s medical staff have completed inoculations.

“Simply put, this is a collapse of the medical system,” said Yuji Tohda, the director of Kindai University Hospital in Osaka.

“The highly infectious British variant and slipping alertness have led to this explosive growth in the number of patients.”

Japan has avoided the large infections suffered by other nations, but the fourth pandemic wave took Osaka prefecture by storm, with 3,849 new positive tests in the week to Thursday.

That represents a more than fivefold jump over the corresponding period three months ago.

Just 14% of the prefecture’s 13,770 COVID-19 patients have been hospitalised, leaving the majority to fend for themselves. Tokyo’s latest hospitalisation rate, in comparison, is 37%.

A government advisory panel sees rates of less than 25% as a trigger to consider imposition of a state of emergency.

By Thursday, 96% of the 348 hospital beds Osaka reserves for serious virus cases were in use. Since March, 17 people have died from the disease outside the prefecture’s hospitals, officials said this month.

The variant can make even young people very sick quickly, and once seriously ill, patients find it tough to make a recovery, said Toshiaki Minami, director of the Osaka Medical and Pharmaceutical University Hospital (OMPUH).

“I believe that until now many young people thought they were invincible. But that can’t be the case this time around. Everyone is equally bearing the risk.”

Minami said a supplier recently told him that stocks of propofol, a key drug used to sedate intubated patients, are running very low, while Tohda’s hospital is running short of the ventilators vital for severely ill COVID-19 patients.

Caring for critically ill patients in the face of infection risk has taken a serious toll on staff, said Satsuki Nakayama, the head of the nursing department at OMPUH.

“I’ve got some intensive care unit (ICU) staff saying they have reached a breaking point,” she added. “I need to think of personnel change to bring in people from other hospital wings.”

About 500 doctors and 950 nurses work at OMPUH, which manages 832 beds. Ten of its 16 ICU beds have been dedicated to virus patients. Twenty of the roughly 140 serious patients taken in by the hospital died in the ICU.

Yasunori Komatsu (OTC:KMTUY), who heads a union of regional government employees, said conditions were dire as well for public health nurses at local health centres, who liaison between patients and medical institutions.

“Some of them are racking up 100, 150, 200 hours of overtime, and that has been going on for a year now…when on duty, they sometimes go home at one or two in the morning, and go to bed only to be awakened by a phone call at three or four.”

Medical professionals with firsthand experience of Osaka’s struggle with the pandemic take a negative view on holding the Tokyo Games, set to run from July 23 to August 8.

“The Olympics should be stopped, because we already have failed to stop the flow of new variants from England, and next might be an inflow of Indian variants,” said Akira Takasu, the head of emergency medicine at OMPUH.

He was referring to a variant first found in India that the World Health Organisation (WHO) designated as being of concern after initial studies showed it spread more easily.

“In the Olympics, 70,000 or 80,000 athletes and the people will come to this country from around the world. This may be a trigger for another disaster in the summer.”No one’s safe anymore: Japan’s Osaka city crumples under COVID-19 onslaughtAdd a Comment