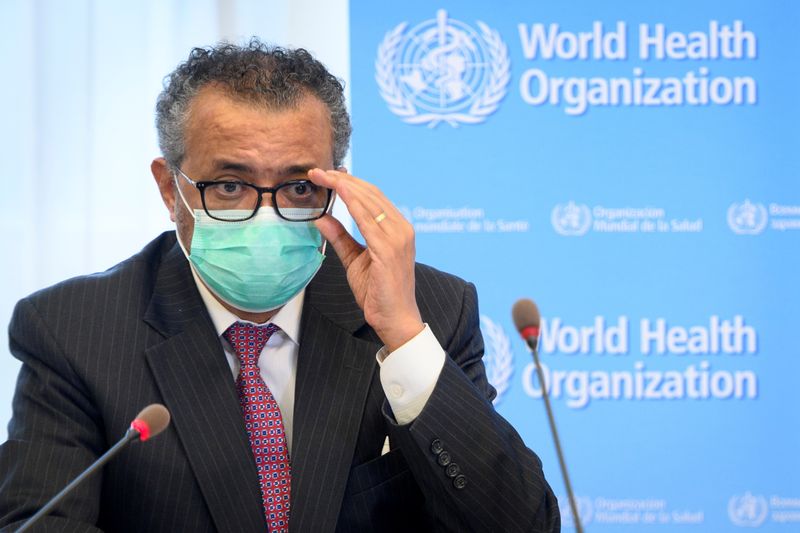 © Reuters. World Health Organization (WHO) Director General Tedros Adhanom Ghebreyesus speaks during a bilateral meeting with Swiss Interior and Health Minister Alain Berset on the sidelines of the opening of the 74th World Health Assembly at the WHO headquarters, i

GENEVA (Reuters) -The COVID-19 pandemic is being perpetuated by a “scandalous inequity” in vaccine distribution, the head of the World Health Organization (WHO) said on Monday as he set new targets for protecting people in the poorest countries.

WHO director-general Tedros Adhanom Ghebreyesus warned that no country should assume that it’s “out of the woods”, no matter its vaccination rate, as long as the SARS-CoV-2 virus and its variants spread elsewhere.

“The world remains in a very dangerous situation,” Tedros told the opening of the annual assembly of health ministers from its 194 member states.

“As of today, more cases have been reported so far this year than in the whole of 2020. On current trends, the number of deaths will overtake last year’s total within the next three weeks. This is very tragic,” he said.

He said more than 75% of all vaccines had been administered in just 10 countries.

“There is no diplomatic way to say it: a small group of countries that make and buy the majority of the world’s vaccines control the fate of the rest of the world.”

The COVAX facility, run by WHO and the GAVI vaccine alliance, has delivered 72 million vaccine doses to 125 countries and economies since February – barely sufficient for 1% of their populations, Tedros said.

He urged countries to donate vaccine doses to COVAX to enable 10% of the populations of all countries to be inoculated by September and 30% by year-end. This meant vaccinating 250 million more people in just four months, he said.

“This is crucial to stop disease and death, keep our healthcare workers safe, reopen our societies and economies,” Tedros said.

Tedros also called on vaccine manufacturers to give COVAX the first right of refusal on new volumes of vaccines, or to commit 50% of their volumes to COVAX this year.

French President Emmanuel Macron called for the WHO to be empowered to visit countries rapidly in case of outbreaks with potential to spark a pandemic, and to access data.

Macron and German Chancellor Angela Merkel, in separate pre-recorded remarks to the assembly, called for the U.N. agency’s funding to be improved and backed the idea of a new international treaty to prevent pandemics.WHO sets new targets for vaccinating world’s poorest to end ‘scandalous inequity’Add a Comme