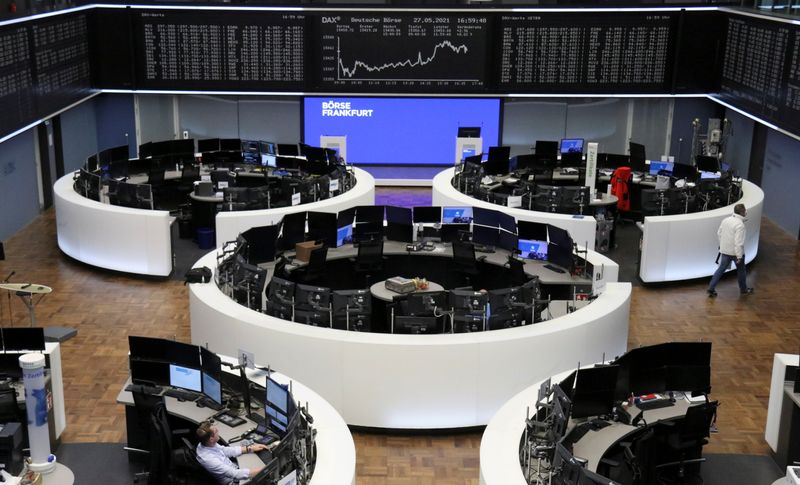 (Reuters) -European shares rose to a record high on Friday as UK-exposed financial stocks gained following a hawkish comment from a Bank of England official, with the prospects of increased U.S. fiscal spending boosting market sentiment.

The Europe-only STOXX index and the European blue chip index added about 0.4% each, trading just below multi-year highs.

Bank stocks rose 0.6% to a 15-month high, tracking a rise in eurozone bond yields. British lenders, including HSBC, led the gains after a Bank of England policymaker suggested an earlier-than-signaled hike in UK lending rates. [GVD/EUR]

Gains in UK-exposed stocks supported the insurance and financial services sectors, which were the best performing sectors for the day.

Optimism over economic growth has supported European stocks this year, with several economies loosening their COVID-19 curbs against the backdrop of a steady vaccination campaign.

The reopening measures have boosted the travel and leisure stocks, which were set to outpace their regional peers this week with a 4.2% jump.

“Improving expectations underscore a rapid rebound in economic activity in the coming quarters as economies reopen,” TS Lombard analysts wrote in a note.

“Euro area has plenty of room to catch up in recouping economic losses due to the pandemic. But the hard work comes beyond the initial bounce.”

European economic sentiment and consumer confidence data, which is due later in the day, is also expected to show an improvement in May.

Markets also took comfort in the prospect of more liquidity, after a report said U.S. President Joe Biden will seek $6 trillion in federal spending for 2022. Biden is expected to unveil his first full budget later in the day. [MKTS/GLOB]

Investors were also watching for a spike in the U.S. Federal Reserve’s favoured inflation reading, which due later in the day.

The mining and resources sector rose 0.4%, supported by a rise in copper prices on hopes of more demand. [MET/L]

Among individual movers, Spanish bank Sabadell fell more than 2% even after it outlined plans for more cost cuts to improve profitability.