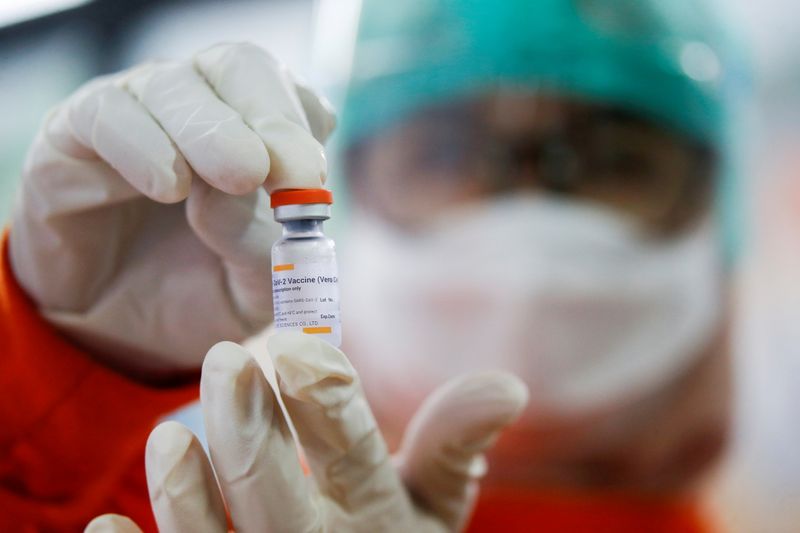 © Reuters. FILE PHOTO: A medical worker holds a dose of the Sinovac vaccine at a district health facility as Indonesia begins mass vaccination for the coronavirus disease (COVID-19), starting with its healthcare workers, in Jakarta, Indonesia January 14, 2021. REUTE

GENEVA (Reuters) -The World Health Organization (WHO) said on Tuesday it has approved a COVID-19 vaccine made by Sinovac Biotech for emergency use listing, paving the way for a second Chinese shot to be used in poor countries.

A WHO emergency listing is a signal to national regulators of a product’s safety and efficacy and will allow the Sinovac shot to be included in COVAX, the global programme providing vaccines mainly for poor countries, which faces major supply problems due to curbs on Indian exports.

The WHO’s independent panel of experts said in a statement it recommended Sinovac’s vaccine for adults over 18. There was no upper age limit as data suggested it is likely to have a protective effect in older people.

The WHO’s technical advisory group, which began meeting on May 5, made the decision after reviewing the latest clinical data on the Sinovac vaccine’s safety and efficacy as well as the company’s manufacturing practices.

WHO Director-General Tedros Adhanom Ghebreyesus welcomed the move, calling the vaccine safe and effective and noting its easy storage requirements make it suitable for low-income countries.

“It’s now crucial to get these lifesaving tools to the people that need them quickly,” he told a briefing.

Branded CoronaVac in some regions, it is the eighth vaccine to win such a WHO listing to combat COVID-19 and the second developed by a Chinese company, after the May 7 approval of a shot developed by state-backed Sinopharm.

While a third Chinese vaccine, produced by CanSino Biologics, has submitted clinical trial data, no WHO review has been scheduled.

Sinovac said that it had supplied more than 600 million doses of its vaccine at home and abroad as of end-May and over 430 million doses have been administered.

The endorsement is a big boost for Sinovac’s vaccine after data in clinical trials showed a wide range of efficacy rates.

The WHO said results showed it prevented symptomatic disease in 51% of those vaccinated and prevented severe COVID-19 and hospitalisation in 100% of the studied population.

Indonesia said on May 12 that its study of 120,000 healthcare workers who had received the vaccine found it was 94% effective at preventing symptomatic disease.

In a preliminary evaluation, the SAGE panel found that the shot was effective in preventing COVID-19 in adults under 60, but that some quality data on the risk of serious adverse effects was lacking.

It cited evidence gaps in safety in pregnancy, and on safety and clinical protection in older adults, those with underlying disease, and evaluation of rare adverse events.

Sinovac chairman and chief executive Weidong Yin said in a statement that clinical trials had provided a “solid scientific foundation” for the drugmaker’s shot to be approved by more than 40 countries and by the WHO.

China has already deployed hundreds of millions of doses of both Sinopharm and Sinovac vaccines at home and exported them to many countries, particularly in Africa, Asia and Latin America.WHO approves Sinovac COVID shot in second Chinese milestone1