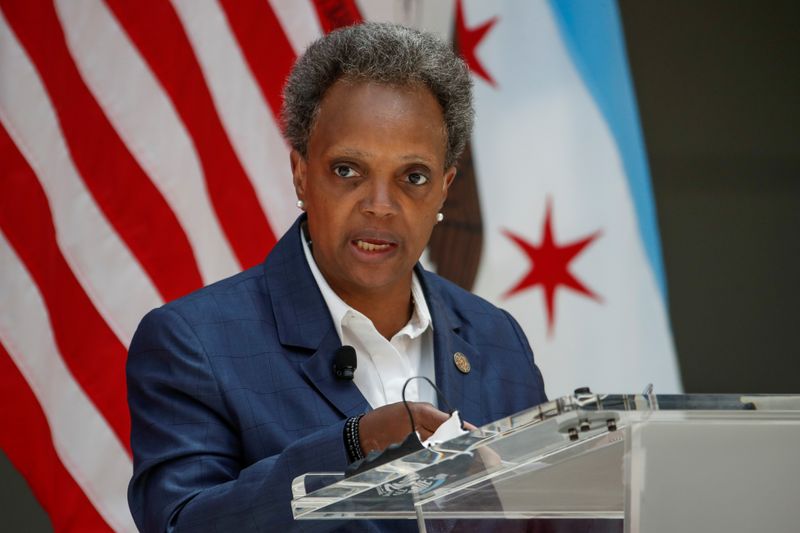 (Reuters) – Chicago Mayor Lori Lightfoot said on Thursday that she has moved up the city’s timetable for a full reopening from coronavirus restrictions to match the rest of the state of Illinois.

Lightfoot’s earlier plan was to allow bars, restaurants, hotels and sports stadiums to open to full capacity on July 4. However, she said on Thursday the city was ready to join the rest of the state in lifting all capacity restrictions on June 11.

“Because you’ve masked up, socially distanced and got vaccinated, we’re now moving to Phase 5 on Friday, June 11 in alignment with the state. This means Chicago is scheduled to fully reopen”, she said on Twitter.

Illinois Governor JB Pritzker said last month that the state was on track to move to a final full reopening phase on June 11.

Chicago is seeing a rolling seven-day average of 135 new COVID-19 cases a day, which is down 44% from last week and under the 200 cases per day metric that the city’s health officials have long said would indicate that the pandemic’s spread is more under control, according to NBC Chicago.

Hospitalizations are down 57% from the previous week as of Thursday and deaths are down to an average of four per day, NBC Chicago said, citing city data.

Two-thirds of Illinois adults have received at least one dose of a coronavirus vaccine, while nearly 51% are fully vaccinated, having received both of the required doses from Pfizer (NYSE:PFE) or Moderna (NASDAQ:MRNA), or Johnson & Johnson (NYSE:JNJ)’s single shot, according to the Chicago Tribune.Chicago to reopen fully on June 11, mayor says1Comments (1)