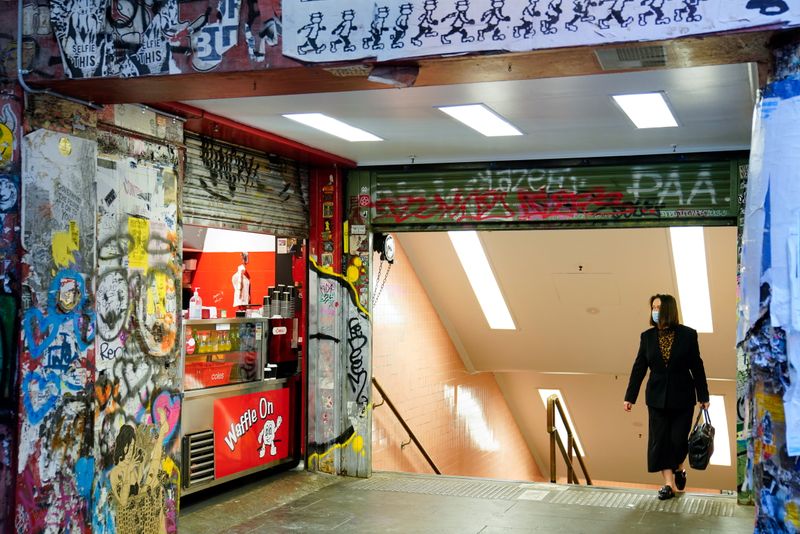 © Reuters. FILE PHOTO: A woman walks past an empty cafe during morning commute hours on the first day of a seven-day lockdown as the state of Victoria looks to curb the spread of a coronavirus disease (COVID-19) outbreak in Melbourne, Australia, May 28, 2021. REUTE

Victoria, Australia’s second-most-populous state, was plunged into a one-week lockdown on May 27 to contain a virus outbreak, forcing its 7 million residents to remain home except for essential business.

The lockdown was extended in Melbourne until June 10, while some restrictions were relaxed in other regions in the state.

Two new locally acquired cases, both linked to existing clusters, were reported on Tuesday, down from 11 a day earlier.

“While we never want to see new cases, it is reassuring that we are again seeing these cases with clear links to existing outbreaks,” Victoria state Acting Premier James Merlino told reporters in Melbourne.

Merlino said contact tracers have linked the source of the highly infectious Delta virus variant to an overseas traveller who entered hotel quarantine in Melbourne on May 8.

But officials said that it was still unclear how the Delta variant was transmitted into the community and that further tests would be needed.

Prime Minister Scott Morrison said he would like to see the COVID-19 lockdown in Melbourne lifted as early as possible and urged authorities to balance risks when they decide to shut down large parts of the economy.

“Further restrictions around the country should either not occur at all, or for a very, very narrow set of circumstances,” Morrison told reporters in Sydney.

Australia has reported zero local cases for most days this year, encouraging authorities to ease restrictions helping the country’s A$2 trillion ($1.55 trillion) economy rebound sharply to above pre-pandemic levels.

Though case numbers remained in single digits on almost all days through the lockdown, the emergence of the highly contagious Delta variant, first detected in India, late last week had stoked concerns of a major spike in infections.

The Delta variant has been classified by the World Health Organization as among the four COVID-19 variants of concern because of evidence that it spreads more easily, and that it most likely caused the latest devastating wave of COVID-19 in India.

Australia has fared better than many other developed countries in containing COVID-19, largely with snap lockdowns, regional border restrictions and tough social distancing rules. It has reported just under 30,200 cases and 910 deaths since the pandemic began.

The latest outbreak has spurred a surge in people getting inoculated across Australia as federal, state and territory governments look to step up the pace of a sluggish nationwide vaccination drive.

New South Wales, Australia’s most populous state, on Tuesday said it would build a second mass vaccination hub while South Australia extended its rollout to include people in their 40s. The Northern Territory has made vaccines eligible for anyone older than 16.

About 20% of Australia’s adult population has received a first vaccine dose, with about 5.1 million total shots administered so far.