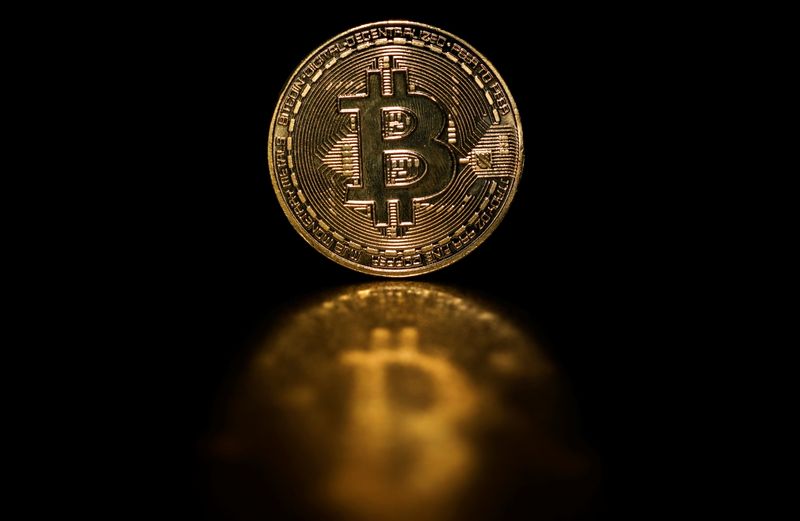 © Reuters. FILE PHOTO: A representation of the virtual cryptocurrency Bitcoin is seen in this picture illustration taken June 7, 2021. REUTERS/Edgar Su/Illustration

By Karin Strohecker and Tom Arnold

LONDON (Reuters) -A push by El Salvador’s President Nayib Bukele to make his country the first in the world to formally adopt bitcoin as legal tender has sparked concerns about the outlook for its programme with the International Monetary Fund (IMF).

Bukele said on Saturday he will send a bitcoin bill to Congress in days to come, touting its potential to help Salvadorans living abroad send remittances home.

El Salvador’s top trade official said the U.S. dollar would continue to be legal tender, underscoring that bitcoin transactions would be by choice and tied to the dollar exchange rate.

This could further complicate the Central American country’s quest to seek a more than $1 billion-program with the IMF. In May, Bukele’s party strained relations with Washington when it ousted five Supreme Court judges and the top prosecutor.

Trade and Investment Minister Miguel Kattan said bitcoin was already in limited use in El Salvador, even to buy pupusas, the national street snack.

“The ability to do operations with bitcoin should not spark concern,” Kattan told a news conference.

Still, analysts saw problems with the move to bitcoin.

“This may just reflect a long-term initiative or maybe even just a flashy PR tactic; however it shows lack of coordination with impulsive announcements that contradict a cohesive economic plan,” she said, adding Salvadorian bonds faced a Bukele risk premium of as much as 75 basis points over comparable Costa Rica bonds.

El Salvador’s dollarized economy relies heavily on money sent back from expatriate workers. World Bank data showed remittances to the country made up nearly $6 billion or around a fifth of GDP in 2019, one of the highest ratios in the world.

The IMF’s head of mission for El Salvador, Alina Carare, said late on Monday that the fund is “following the news and will have more information as we continue our consultations with the authorities.”

Carlos de Sousa, a portfolio managers at Vontobel Asset Management, said the bitcoin push looked ill-considered with Bukele potentially shooting himself in the foot by making the raising of tax revenue more difficult.

“Typically, he gets a lot of positive reactions on Twitter and the reactions to this were kind of like ‘Mr. President, okay, where we can read about this? What does it mean?’ – so people don’t really understand.”

Bukele changed his Twitter profile picture over the weekend to give himself red laser eyes used by supporters of cryptocurrencies on social media.

“Satellite infrastructure to be built, helping rural El Salvadorans connect to the internet, and thereby Bitcoin network, in places where land-based connectivity is poor. @Blockstream plans to contribute their expertise and tech to make the nation a model for the world,” Bukele said on Twitter on Monday, in a retweet of a Documenting Bitcoin @DocumentingBTC post.