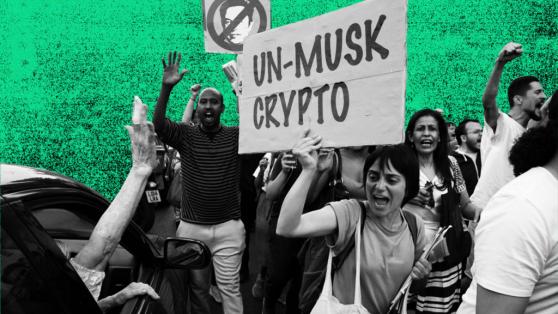 Based on his series of anti-Bitcoin tweets over the past several weeks, it doesn’t take a rocket scientist to figure out that SpaceX rocket entrepreneur, Elon Musk, is not well liked within the crypto-community. He added even more haters following his latest Twitter post on Thursday, June 3rd where he cryptically used the heartbreak and Bitcoin emoji together at the top of the tweet. Implying some type of breakup…or something.

No one knows what Musk was trying to convey exactly in this tweet, but it managed to result in a 5% drop in the price per Bitcoin within hours. Hundreds took to the Twitter webs to chastise Musk for his nonsensical tweets that end up hurting everyday investors.

Elon Musk is out so out of touch with reality right now. As a billionaire he finds it funny to manipulate the market and play with the investments of emotionally attached working class people. No money in the world can compensate for being so dislikable.

Good Morning to all except Elon Musk

Greater power with great responsibility, great. Great power with random “humor”, not great, and not funny.

Anyone else feel that with every Bitcoin tweet, @elonmusk is losing more and more clout?

I am not sure why I didn’t do this earlier pic.twitter.com/pUXUSAm2UE

Musk’s series of silly tweets over recent weeks have not only hurt the holdings of individual investors, his actions are hurting his own reputation among potential customers of Tesla (NASDAQ:TSLA) vehicles, as well as his other consumer offerings including: Starlink satellite services, home solar systems, battery walls, and SpaceX flights.

As Yahoo! (NASDAQ:AABA) Finance first reported, favorable public sentiment toward Musk recently reached an all-time low based on research from sentiment measuring firm Awario, which tracked the positive-to-negative ratio regarding tweets about Musk.

According to Awario, in January 2021 Musk had the same percentage of positive versus negative tweets. In May, the positive-to-negative sentiment dropped about 25% – marking the lowest level since Awario started tracking public sentiment for Musk last October.

Ironically and inexplicably, he has done this damage to himself – eroding public support, trust, and respect, one ridiculous tweet at a time.

Since March, Musk has named himself the “Technoking of Tesla” and the “DodgeFather” – perhaps it’s time Musk accept another title from cryptocurrency influencer FABRI, who tweeted it to his more than 400,000 followers on Twitter.

Elon musk is the most hated person in the crypto world. He earned it.

Hmmm…”most hated person in the crypto world” – it has a nice ring to it, perhaps since it’s the ring of truth.