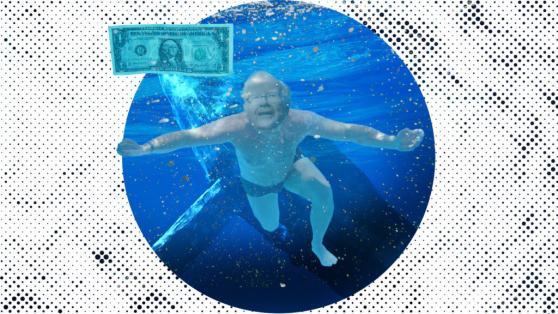 Warren Buffet Dipped His Toes Into Digital – Crypto Next?

Serial investor Warren Buffet may be slowly changing his stance on Bitcoin and other cryptocurrencies following his company’s latest investment. Berkshire Hathaway, the multinational conglomerate with Warren Buffet as its CEO, sunk half a billion dollars into a Brazilian financial firm as it seeks to stretch its tentacles across several industries.

For cryptocurrency enthusiasts this is promising news as the financial firm Berkshire Hathaway has invested in is the parent company of Easynvest, an investment platform that allows users access to Bitcoin ETFs. This triggered a wave of excitement in the community given Warren Buffet’s previous anti-Bitcoin statements.

Warren Buffet’s company, Berkshire Hathaway, has made a substantial $500 million investment in Nubank, a Brazilian private bank that was founded in 2013. Nubank has around 40 million customers and made the list for CNBC’s Disruptive List for 2021.

Nubank is the parent company of Easynvest, an investment company that provides investment services free of commissions to users. Through the platform, users have access to Bitcoin ETFs and other offerings including 3iQ’s QBTC Bitcoin investment.

Although Berkshire Hathaway has made several investments in financial firms and traditional banks, this is the first time that the multinational conglomerate is investing in a financial firm with cryptocurrency affiliations.

The recent investment in Nubank has been construed by some analysts as Buffet slowly changing his stance on Bitcoin to join the ranks of newly converted crypto believers.

Last year in an interview with CNBC, Warren Buffet made clear his position on Bitcoin and other cryptocurrencies. The billionaire stated that “cryptocurrencies basically have no value and they don’t produce anything.” He further added that he does not have any cryptocurrency and has no plans of owning any in the future.

Cryptocurrency enthusiasts have been quick to cast their minds back to the 2018 Berkshire Hathaway annual shareholder’s meeting where Buffet referred to Bitcoin as being like rat poison. He further elaborated, describing the currency as a mirage and “not a currency.”

Warren Buffet is not the only one at Berkshire Hathaway to harbor anti-Bitcoin sentiments; his deputy, Charlie Munger, referred to Bitcoin as “disgusting” and contrary to the interest of civilization. Munger cast further aspersions against Bitcoin and said that it was created out of thin air and is the “go-to payment for criminals.”

Several attempts have been constructed to facilitate a change of heart for Warren Buffet regarding Bitcoin, the latest coming from the founder of Tron. Sun made a bid of over $4 million in a charity auction for the opportunity to have a meal with Buffet, during which neither Sun nor Buffet were able to change the other’s opinion.