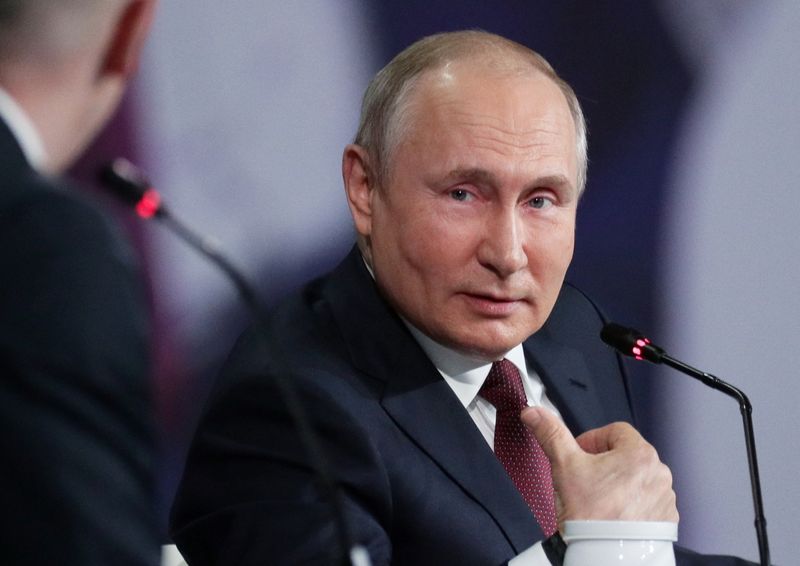 WASHINGTON (Reuters) -Russian President Vladimir Putin, in an interview with NBC News ahead of his meeting with U.S. President Joe Biden next week, said U.S.-Russia relations are at their lowest point in years.

Putin and Biden will meet in Geneva on Wednesday. The White House has said Biden will bring up ransomware attacks emanating from Russia, Moscow’s aggression against Ukraine, the jailing of dissidents and other issues that have irritated the relationship.

“We have a bilateral relationship that has deteriorated to its lowest point in recent years,” Putin said, according to an NBC translation of excerpts of an interview broadcast on Friday.

Asked about Biden calling him a killer in an interview in March, Putin said he had heard dozens of such accusations. “This is not something I worry about in the least,” Putin said.

Biden, at the start of an eight-day visit to Europe this week, said: “We’re not seeking conflict with Russia.”

“We want a stable and predictable relationship … but I’ve been clear: The United States will respond in a robust and meaningful way if the Russian government engages in harmful activities.”

Putin was asked about several Russian dissidents whose deaths have been blamed on Moscow, including ex-KGB spy Alexander Litvinenko who was poisoned in 2006. Putin dismissed the question as “verbal indigestion.“ He said some of those responsible for the deaths are in prison.

On the issue of recent ransomware attacks that the United States has traced to Russia, Putin denied any knowledge of the hackings and called on Biden to reach an agreement with him on cyberspace, NBC News said.

Putin also dismissed a report in the Washington Post this week that Russia was preparing to supply Iran with an advanced satellite that would enable it to track potential military targets across the Middle East.

“It’s just fake news. At the very least, I don’t know anything about this kind of thing,” Putin said, according to NBC News. “It’s just nonsense garbage.”Putin says relations with U.S. at lowest point in years6Comments (6)