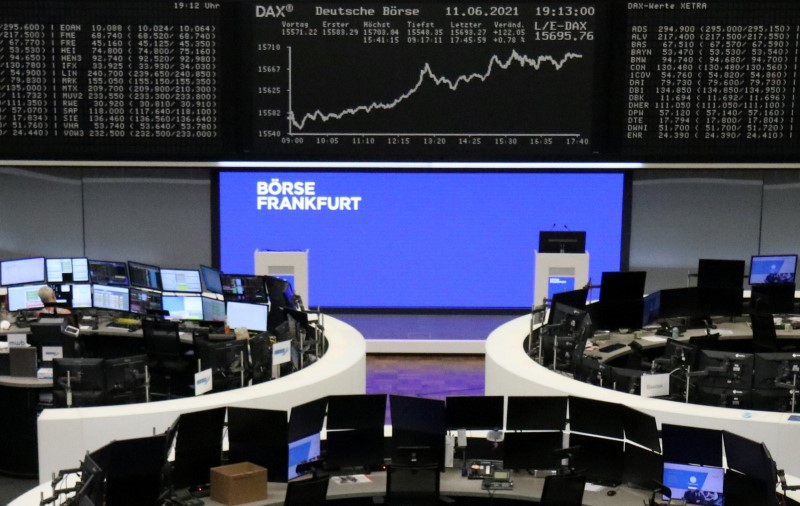 (Reuters) -European shares hit a record high on Monday (NASDAQ:MNDY) as investors bet on global central banks sticking to an accommodative stance on monetary policy even as the post-pandemic economic recovery gathers pace.

The pan-European STOXX 600 was up 0.3% after ending Friday with its fourth consecutive weekly gain.

Germany’s DAX also hit an all-time high, while the UK’s FTSE 100 scaled its highest since February 2020 ahead of a decision by the government on whether to delay England’s reopening from a third national lockdown. (L)

After the European Central Bank last week stood pat on monetary policy, all eyes this week will be on the U.S. Federal Reserve’s policy meeting for signs it was shifting from its stance that rising consumer prices would be temporary.

Any cues that policymakers might be digging in for a more sustained rise in inflation could spark fears of a sooner-than-expected unwinding of easy money policies and hurt stocks, analysts said.

“Investors in general appear to be buying the central bank narrative that high levels of inflation are transitory and will soon pass,” said Michael Hewson, a market analyst at CMC Markets UK.

“If central banks start to lay out a path that involves a withdrawal of stimulus, markets could get spooked. No one is seriously suggesting a rise in rates yet, but there is scope to reduce the monthly bond purchase amount without jeopardising the recovery.”

Italy’s stock index rose 0.3% and its 10-year sovereign bond yield touched its lowest levels in almost eight weeks after ECB President Christine Lagarde in an interview supported the central bank’s view that it was in no rush to taper its aggressive emergency stimulus.

Shell (LON:RDSa) rose 1.5% as Reuters reported the energy giant was reviewing its holdings in the largest U.S. oil field for a potential sale.

British outsourcer Serco Group (LON:SRP) jumped 3.8% after raising its 2021 profit outlook on expectations of stronger demand for its COVID-19 services.

On the other hand, Dutch medical equipment company Philips tumbled 4.4% to the bottom of the STOXX 600 as it said it would recall some “CPAP” breathing devices and ventilators globally because of a foam part that might degrade and become toxic.Economic recovery hopes power European shares to record high2Comments (2)