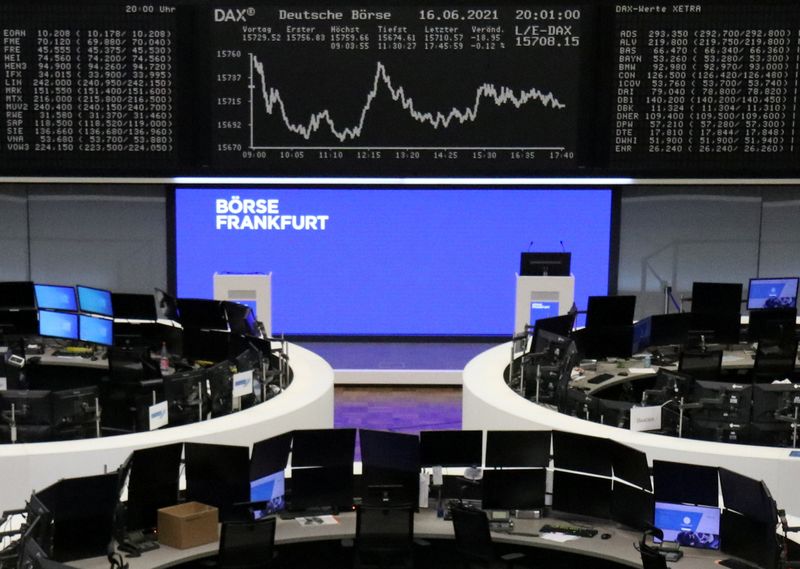 (Reuters) – European shares pulled back from record highs on Thursday, tracking overnight declines on Wall Street after the Federal Reserve surprised investors by indicating it could start tapering its massive stimulus sooner than expected.

The pan-European STOXX 600 index was down 0.4% by 0705 GMT to snap a nine-day gaining streak, with mining, utility and technology stocks leading declines.

S&P 500 futures fell about 0.3% a day after the benchmark U.S. index lost half a percent following remarks from the Fed that it could begin raising interest rates in 2023, a year earlier than expected.

The Fed’s tone on tightening its pandemic-era policy was notably different from the European Central Bank’s stance last week, when it said it was too early to debate closing the money taps despite a recent rise in inflation.

All eyes on Thursday will be on final May inflation numbers for the euro zone, due at 0900 GMT.

In company news, German biotech CureVac NV sank 50% after it said late on Wednesday its COVID-19 vaccine missed the main goal in a late-stage trial, raising doubts about the potential delivery of hundreds of millions of doses to the European Union.European shares slip from record highs on hawkish FedAdd a Comment