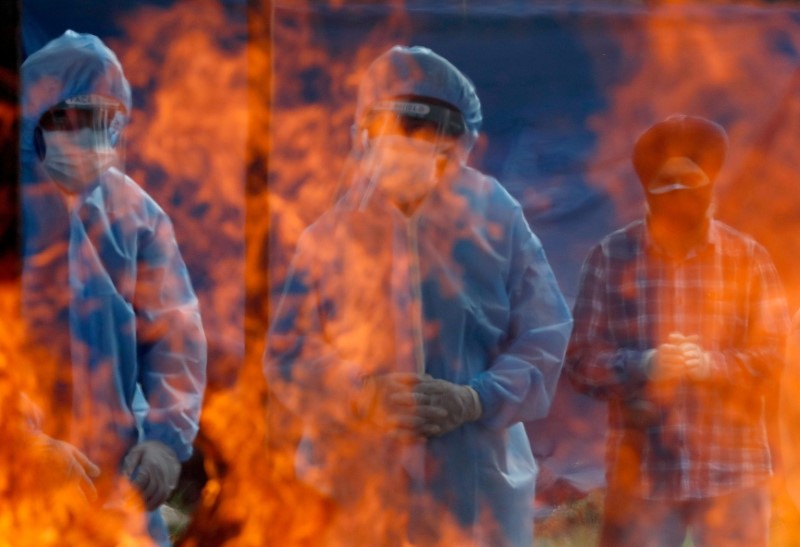 © Reuters. FILE PHOTO: Relatives stand next to the burning pyre of a man who died from the coronavirus disease (COVID-19) during his cremation at a crematorium ground in Srinagar May 25, 2021. REUTERS/Danish Ismail

By Roshan Abraham and Ahmed Farhatha

(Reuters) – Coronavirus-related deaths worldwide passed a grim milestone of 4 million on Thursday, according to a Reuters tally, as many countries struggle to procure enough vaccines to inoculate their populations.

While the number of new cases and deaths have abated in countries like the United States and Britain, several nations have vaccine shortages as the Delta variant becomes the dominant strain around the world.

It took over a year for the COVID-19 death toll to hit 2 million, while the next 2 million were recorded in just 166 days, according to a Reuters analysis.

The top five countries by total number of deaths – the United States, Brazil, India, Russia and Mexico – represent about 50% of all deaths in the world, while Peru, Hungary, Bosnia, the Czech Republic and Gibraltar have the highest death rates when adjusted for population. (Graphic on global cases and deaths) https://tmsnrt.rs/34pvUyi

Countries in Latin America are facing their worst outbreak since March, with 43 of every 100 infections in the world being reported in the region, according to a Reuters analysis. The top nine countries reporting the most deaths per capita over the last week were all in Latin America.

Hospitals in Bolivia, Chile and Uruguay are largely seeing COVID-19 patients between the ages of 25 and 40 as the trend toward younger patients continued. In Brazil’s Sao Paulo, 80% of intensive care units (ICU) occupants are COVID-19 patients.

Soaring deaths are straining the operating capacity of crematoriums in developing nations and gravediggers in several countries have been forced to expand cemeteries with row after row of new tombs.

India and Brazil are the countries reporting the most deaths each day on a seven-day average and are still troubled with cremation woes and lack of burial space. India accounts for one in every three deaths reported worldwide each day, according to a Reuters analysis.

Many health experts believe that official death toll to be undercounted globally, with the World Health Organization (WHO) last month estimating fatalities to be much higher.

Last week, the Indian state of Bihar raised its COVID-19 death toll sharply higher after the discovery of thousands of unreported cases, lending weight to concerns that India’s overall death tally is significantly more than the official figure.

As poorer nations struggle to inoculate their populations due to vaccine shortages, wealthier countries have been urged to donate more to control the pandemic.