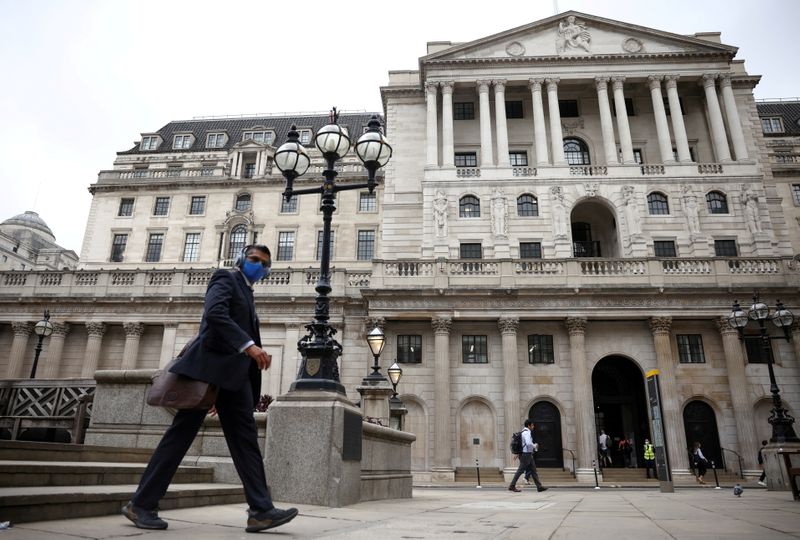 © Reuters. FILE PHOTO: A person walks past the Bank of England in the City of London financial district, in London, Britain, June 11, 2021. REUTERS/Henry Nicholls/File Photo

Bank of England chief economist Andy Haldane was alone in May when he voted to halt the quantitative easing (QE) bond purchases in August once they reached 825 billion pounds.

Economists expect Haldane to retain this stance when the BoE announces its latest policy decision on Thursday and are looking to see if others on the Monetary Policy Committee join him.

Haldane has ramped up his anti-inflation rhetoric ahead of what will be his final MPC meeting before leaving the BoE. In early June he described https://www.reuters.com/world/uk/bank-englands-haldane-sees-pretty-punchy-pressures-prices-2021-06-09 the policy outlook as the most dangerous since sterling dropped out of the European Exchange Rate Mechanism in 1992.

May’s consumer price inflation https://www.reuters.com/article/us-health-coronavirus-britain-economy-idCAKCN2DS0GT came in above the BoE’s and other economists’ forecasts at 2.1%, the first time it had surpassed the BoE’s 2% target since July 2019. Some economists now see inflation exceeding 3% later this year versus BoE forecasts of 2.5% for the end of 2021.

Although British inflation is below the 5% last recorded in the United States, and its post-COVID recovery is less advanced, financial markets expect the BoE to begin raising rates before the U.S. Federal Reserve – a historically rare sequence.

“The BoE is not aiming to overshoot the (inflation) target, like the Fed,” said Bank of America (NYSE:BAC) economist Robert Wood, who now predicts a first rate rise in Britain in May 2022.

Interest rate futures price in the BoE’s main interest rate rising to 0.25% from its current 0.1% by June 2022, a turnaround from early 2021 when the BoE was viewed as more likely to cut rates below zero.

Gertjan Vlieghe, normally one of the more dovish BoE policymakers, said https://www.reuters.com/article/us-britain-boe-vlieghe-idUSKCN2D81T0 last month he expected rates would need to rise in late 2022 if the economy grew as expected.

But most economists polled https://www.reuters.com/article/britain-economy-poll/poll-bank-of-england-to-look-through-temporary-inflation-rise-idUSL5N2NZ26L by Reuters still expect the BoE to start raising rates only in 2023.

Britain’s economic growth in April was the fastest since July 2020 as “non-essential” shops, pubs and restaurants reopened after widespread vaccinations.

But plans for a further easing on June 21 have been delayed by four weeks due to the fast spread of a new coronavirus variant.

Economic output in April was still almost 4% below pre-pandemic levels after a near 10% slump in 2020, and 1.7 million people – 7% of employees – were relying on government furlough support at the end of May.

Uncertainty about what happens to them when furlough support stops at the end of September is a key reason why most BoE policymakers are not expected to change policy.

Also, the BoE has described energy prices and other factors pushing up prices as “transient”.

Inflation spikes in Britain after the 2008 financial crisis did not trigger 1970s-style wage-price spirals due to the weak bargaining power of many workers, and public inflation expectations have fallen.

“Voting to end QE early would undermine the QE tool, since it works in part by being a credible signal that rates will be lower for longer,” he said.

($1 = 0.7215 pounds)Bank of England set to stay split on QE after inflation jumpAdd a Comme