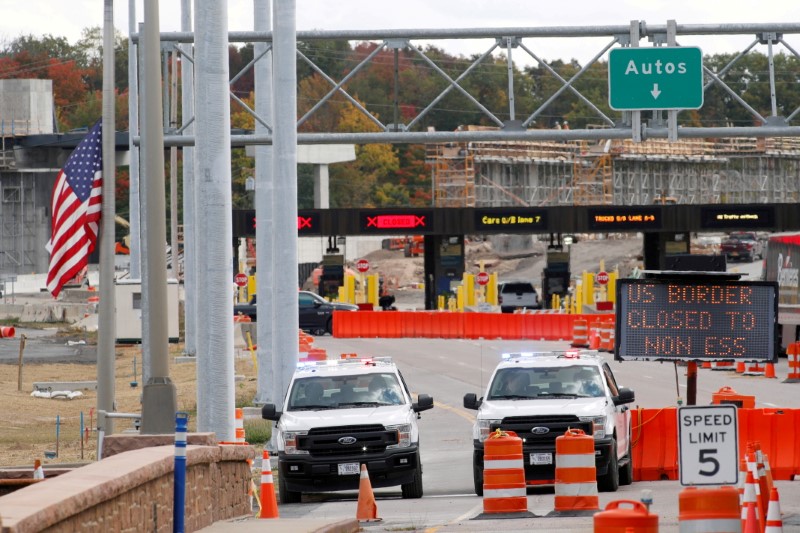 © Reuters. FILE PHOTO: U.S. customs vehicles stand near a sign reading that the border is closed to non-essential traffic, at the Canada-United States border crossing at the Thousand Islands Bridge, to combat the spread of the coronavirus disease (COVID-19) in Lansd

The 30-day extension came after Canada announced its own extension on Friday of the requirements that were set to expire on Monday and have been in place since March 2020 because of the coronavirus pandemic.

The U.S. government held working-group meetings with Canada and Mexico on the travel restrictions last week and plans to hold meetings about every two weeks, U.S. officials told Reuters.

Homeland Security said in a statement it noted “positive developments in recent weeks and is participating with other U.S. agencies in the White House’s expert working groups with Canada and Mexico to identify the conditions under which restrictions may be eased safely and sustainably.”

Some U.S. lawmakers and border communities that have been hit hard by the restrictions have pushed to relax them ahead of the busy summer travel season.

Canada is also under pressure from companies and the tourism industry to ease the ban, which was imposed to help contain the spread of the coronavirus and has been renewed on a monthly basis since March 2020.

Canadian Prime Minister Justin Trudeau stood firm, saying last week the border would stay largely shut until 75% of Canadians had received the first of a two-dose coronavirus vaccine and 20% had been given both shots.

In talks between the United States and Canada last week, the U.S. government did not endorse setting a specific threshold to trigger lifting the restrictions, a person briefed on the talks said.

“The inability of the U.S. and Canadian governments to reach an agreement on alleviating border restrictions … is simply unacceptable,” Democratic Representative Brian Higgins and Republican Representative Bill Huizenga, co-chairs of the Canada-U.S. Interparliamentary Group said on Friday.

The United States is also holding working-group meetings on relaxing travel restrictions with the UK and the European Union, but U.S. and airline officials said previously they did not expect the Biden administration to lift the restrictions until around July 4 at the earliest.U.S extends travel restrictions at Canada, Mexico land borders through July 215